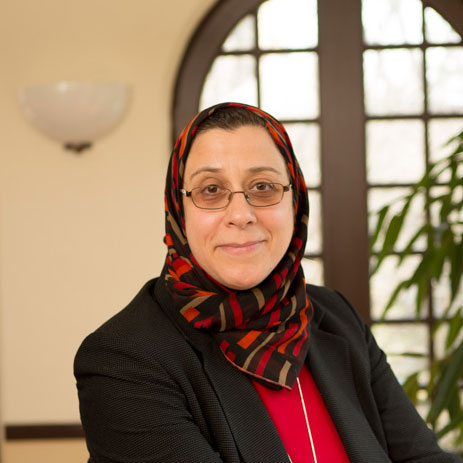 Dean of the Princeton School of Public and International Affairs, Princeton University

Available for Interviews in: English and Arabic

Amaney A. Jamal is Dean of the Princeton School of Public and International Affairs and the Edwards S. Sanford Professor of Politics, Professor of Politics and International Affairs at Princeton University.  She is the former Director of the Mamdouha S. Bobst Center for Peace and Justice. Jamal directs the Workshop on Arab Political Development and the Bobst-American University of Beirut Collaborative Initiative. She is also the co-founder and co-principal investigator at Arab Barometer.

Her book, Barriers to Democracy (2007), which explores the role of civic associations in promoting democratic effects in the Arab world, won the 2008 American Political Science Best Book Award in the Comparative Democratization section. Her other books include, Of Empires and Citizens and her co-edited volume Arab Americans Before and After 9/11. Jamal’s articles have appeared in the American Journal of Political Science, Journal of Politics, Comparative Political Studies, Journal of Conflict Resolution, Comparative Politics, Perspectives on Politics, International Migration Review, and other venues. Her article “Does Islam Play a Role in anti-Immigrant Sentiment: An Experimental Approach.”, in Social Science Research 2015 won the 2016 Louis Wirth Best Article Award: American Sociological Association, International Migration Section.

Jamal is the co-founder and the co-Principal Investigator of  Arab Barometer Project (Winner of the Best Dataset in the Field of Comparative Politics (Lijphart/Przeworski/Verba Dataset Award 2010), and has secured over 5 million dollars in grants for this and other projects from the Middle East Partnership Initiative (MEPI), National Science Foundation (NSF), NSF: Time-Sharing Experiments for the Social Sciences (TESS), Qatar National Research Fund, (QNRF), United States Institute of Peace (USIP), the International Development Research Centre (IDRC), Carnegie Corporation of New York, and the Luce Foundation.

In 2006, Jamal was named a Carnegie Scholar. She holds a Phd from the University of Michigan (2003). Her areas of specialization are the Middle East and North Africa, mass and political behavior, political development and democratization, inequality and economic segregation, Muslim Immigration (US and Europe), gender, race, religion, and class.

Women in Tunisia: Has a female prime minister changed Tunisia?

A New Era in the Middle East?

Why Democracy Stalled in the Middle East?

In 2011, citizens across the Middle East took to the streets to demand more representative governments, social justice, and economic reforms. In Egypt and Tunisia, protest movements toppled dictators who had ruled for decades; authoritarian regimes elsewhere in the region were rattled as never before. The Arab Spring captured imaginations around the world and challenged long-held assumptions about the region’s…

Is there Room for “Bread, Dignity, and Freedom” in U.S. Foreign Policy towards the Arab World?

Over the last several decades, the Arab world’s strategic utility to the U.S. remains a key pillar of U.S. foreign policy. U.S. policy toward the Arab region has been guided by a set of geostrategic priorities that have privileged authoritarian regimes over Arab citizen aspirations for democracy and economic dignity. Unfortunately, the normalized justifications for these policies continue to reinforce…

Live with ASI – Ep. 2.3 : Interview with Dean Amaney Jamal on the Ten Years On project

The Program on Arab Reform and Democracy (ARD) at CDDRL, in partnership with the Arab Studies Institute, is pleased to announce the launch Mofeed-19, a 19-minute video podcast that discusses research efforts pertaining to the impact of the Covid-19 pandemic on the Arab world. The podcast is part of the Mofeed-19 Project, an initiative that builds foundational resources for understanding how…

Gender and Covid-19: Women’s Rights, Roles, and Welfare through the Pandemic

Women and COVID-19 in MENA

Youth in MENA: Findings from the Fifth Wave of the Arab Barometer

Key Findings: Youth economic frustration across MENA is increasing. Youth have little trust in governments, which are widely viewed as being corrupt, leading to a potential crisis of legitimacy in the region. However, views of youth differ relatively little from older generations in this regard. Youth are more likely to want to emigrate and to participate in informal politics. Arab…

Public Sentiment and the Future of MENA: An Interview With Amaney Jamal