Lebanese are the most pessimistic about their country’s economic future of any country surveyed in Arab Barometer’s sixth wave between 2020 and the spring of 2021. Among all the economic worries, the rising cost of living is seen as the biggest challenge. Unsurprisingly, about half citizens (48 percent) are seeking to leave their homeland for better opportunities abroad. Yet, when asked about the primary reason for wanting to emigrate, economic conditions (7 percent) are not the dominant reason given. Instead, the most commonly named reason is corruption (44 percent), followed by security considerations (29 percent), and political reasons (22 percent), implying citizens are even more frustrated by the failure of the political system which ultimately led to the financial crisis.

Unlike in most countries surveyed, there is not a significant gender gap in the desire to emigrate, with 49 percent of men and 46 percent of women wanting to leave their homeland. However, nearly two-thirds (63 percent) of youth ages 18-29 want to leave, presumably due to the lack of hope they have for their futures. Lebanon is also at risk for brain drain, with 61 percent of those with a college education wanting to emigrate compared with 37 percent of those with a secondary degree or less.

Lebanon’s mounting economic crisis pushed around 80 percent of the population into poverty, fueling an influx of migration, including undocumented migration via risky sea routes. In the fall of 2018, 26 percent of Lebanese citizens said they wanted to leave their homeland. Arab Barometer asked the potential Lebanese migrants if they would migrate even if they lacked the necessary papers to allow them to do so. 12 percent of potential migrants in Lebanon said they are willing to leave the country without the proper documents, with men slightly more likely to do so compared to women (14 percent vs 9 percent respectively). 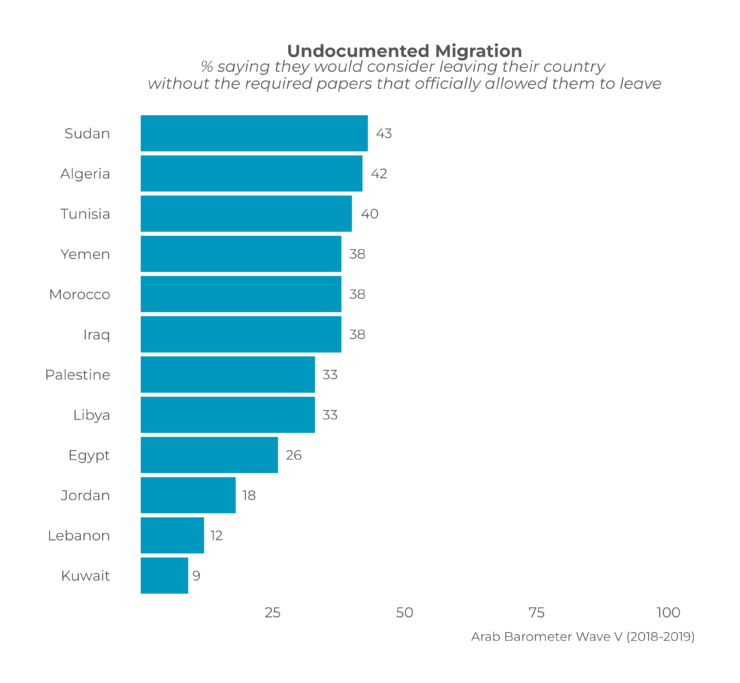 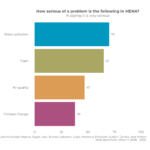 What MENA Citizens Think About The Environment in 11 Graphs