The Arab region is frequently associated with a precarious situation in gender equality. Data from Arab Barometer’s public opinion survey suggest that there is far from universal agreement that women should have equal rights in all public and private spheres.

One critical aspect of gender equality is the right to divorce, as divorce laws and their evolution mirrors the changing role of woman in society. Given the traditional patriarchal culture in the Arab region, one might expect a majority opposing women’s rights to divorce. However, a majority of Arabs (71%) say that women and men should have equal rights in making the decision to divorce. Acceptance for equal divorce rights is relatively high in Lebanon (88%), Iraq (80%), Tunisia (79%), Palestine and Jordan (each 78%), while approval is lower in Yemen (52%) and Sudan (45%). 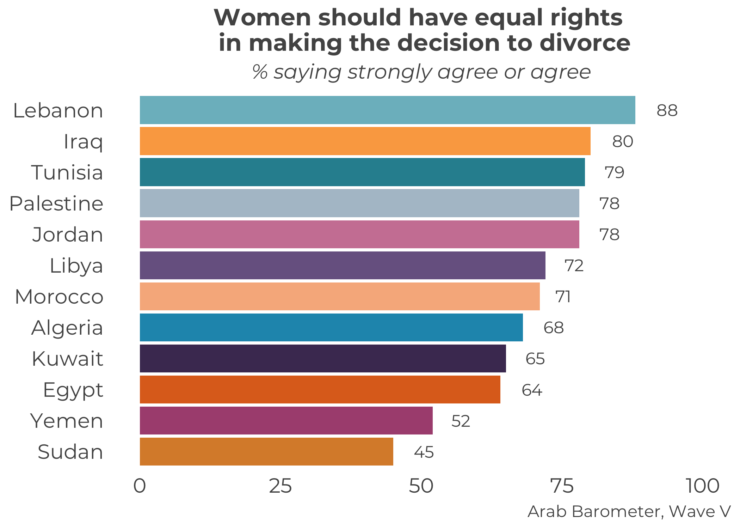 Data from Arab Barometer and World Bank suggest there might be a relationship between a country’s socioeconomic level and approval to an equal right to divorce in the MENA region as well, indicated by a country’s average life expectancy. A high average life expectancy reflects socioeconomic conditions more likely to be found in economically more advanced countries, like a higher standard of living, reduction of poverty and a better-funded health care system.

Given these results, it is clear that there is a positive relationship. Sudan and Yemen, ranking lowest on life expectancy, show the lowest share of people favoring equal rights to divorce. In contrast, Lebanon ranking highest on life expectancy, also has the highest approval rate. However, some countries deviate from the general trend, so other factors might come into play as well.

Religion as an obstacle to gender equality?

Socioeconomic development is also often associated to secularization, contributing to the decline of traditional religious beliefs and the spread of rational-secular values. The survey results indicate that the degree of secularization, measured by frequency of prayer, correlates positively with approval for equal divorce rights.

Given these results, both life expectancy and frequency of prayer can explain some of the variations in attitudes towards equal divorce rights. However, the results show also that other factors might influence gender values as well, as some countries do not fit into the overall picture. Further research is required to analyze the factors determining gender values. Other such factors may include GDP per capita, the proportion of people working in the service sector, the proportion of people with tertiary education, people’s experience with war and colonial history.

Nicolas Schwarz graduated from the University of Oslo with a degree in Political Science and currently lives in Oslo, Norway.