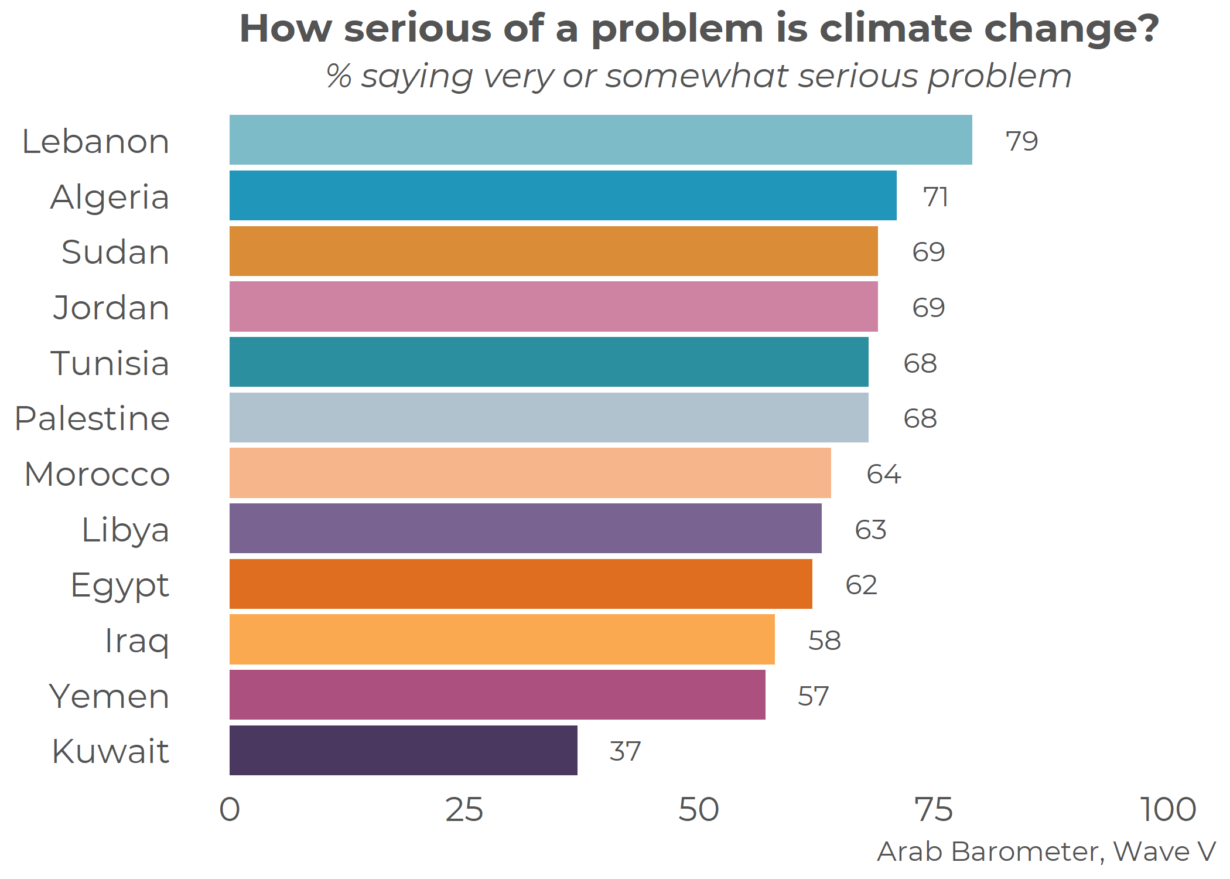 Climate change poses one of the most serious threats to the Middle East and North Africa. A largely water scarce region, environmental deterioration threatens precipitation cycles, food supply, public health, and more. In fact, the results of Arab Barometers’ fifth wave of surveys show that a majority of citizens view climate change as a cause for concern. In Lebanon, nearly eight-in-ten respondents cite climate change as a serious or very serious problem (79 percent), and roughly seven-in-ten say the same in Algeria (71 percent), Sudan (69 percent), Jordan (69 percent), Palestine (68 percent), and Tunisia (68 percent). However, rates of concern drop in Morocco (64 percent), Libya (63 percent), Egypt (62 percent), Iraq (58 percent), and Yemen (57 percent). Interestingly, across all countries surveyed citizens cite greater rates of concern about water pollution, air quality, and trash than they do about climate change. This disparity is most salient when comparing views on climate change to opinions about water pollution. For instance, while nearly all Iraqis consider water pollution a serious or very serious problem (97 percent), they also exhibit some of the lowest rates of concern about climate change. Yet in Iraq, and elsewhere, climate change has contributed significantly to the country’s water challenges – rising temperatures dry up water sources, not only exacerbating water scarcity, but also making bodies of water shallower and more susceptible to pollutants[1]. 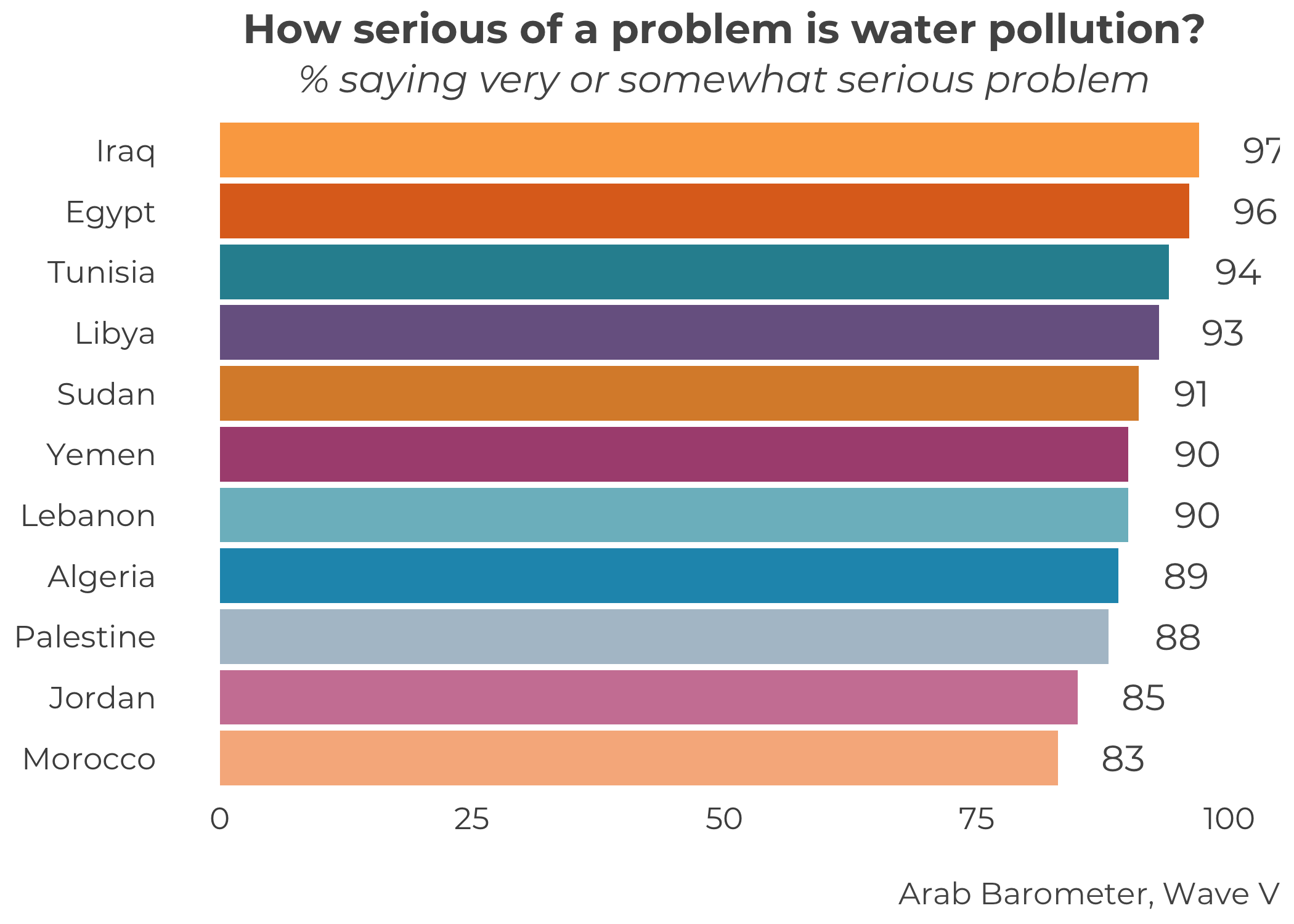 Given the inextricable link between climate change and other environmental issues, what accounts for this discrepancy in respondents’ concerns? One potential explanation lies in the challenge of conceptualizing abstract concerns like climate change as compared to air quality and water pollution, whose effects might appear more tangible to ordinary citizens. In addition to potential challenges with terminology, persistently lower rates of concern with climate change compared to other environmental issues might reflect the public’s understandable difficulty in grasping the pervasiveness and influence of climate change. Though the effects of climate change on water pollution, air quality, and waste are well-documented in scientific and policy-oriented literature[2], these effects are neither self-evident nor prevalent in the sources easily accessible to people with limited resources and competing daily concerns.

The solution to bridging this gap perhaps lies in intensifying climate education and outreach, and emphasizing the impact of climate change on citizens’ immediate, concrete worries. Broad concern among respondents about water pollution and air quality suggests that the Arab public has an interest in or openness to scrutinizing environmental issues. This interest presents an opportunity to draw a clearer link in the minds of citizens between those issues with which they do cite concern and the role of climate change as an amplifier or source of these problems. Climate change affects not only the environment, but the economy as well. As the majority of MENA publics consider the economy to be the greatest challenge facing their country, clarifying the effects of climate change on the economy is crucial for increasing climate engagement among ordinary citizens. In fact, the World Bank projects that MENA will be one of the regions hit hardest by “economic losses from climate related water scarcity as growth rates decline by as much as 6 percent of GDP by 2050”[3]. The region’s youth bulge offers another opportunity in climate education. With roughly 60 percent of the population under the age of 25[4], further incorporating climate education into secondary and higher education curricula can capitalize on demographic trends to motivate and encourage youth participation in climate action. This is particularly important considering that the brunt of climate change reform will fall on today’s younger generations.

The theme of this year’s Earth Day is climate action, an undoubtedly critical step in fighting climate change. However, successful climate action is predicated on wide participation of stakeholders. In MENA, a region fraught with instability, economic woes, food shortages, and water scarcity, climate change is perhaps viewed as a global and tertiary concern. Thus, effective outreach should emphasize the local impacts of climate change on daily lives and its significance to issues the Arab public has identified as important to them.