In recent years, China’s engagement in the Middle East and North Africa (MENA) has been rapidly increasing.  At least 17 MENA countries have signed agreements as part of its Belt and Road Initiative (BRI).  Meanwhile, in response to the COVID pandemic, Chinese vaccines have been secured by a number of countries across the region while China has promised aid to help address the challenges caused by the pandemic. In short, China has taken several steps to try to win the hearts and minds of ordinary citizens across the region.

Before the start of the pandemic, views of China were relatively positive across much of the region. Public opinion surveys conducted by Arab Barometer, a non-partisan research network seeking to understand the views of ordinary citizens in the region, show that many citizens favor stronger economic relations with China. In nationally representative face-to-face surveys conducted in 2018-9,  about half or more said they wanted their country to increase their economic ties with China in nine of twelve countries. A stronger economic relationship with China was most favored by Jordanians (70 percent), Libyans (63 percent) and Sudanese (62 percent). Among the countries surveyed, only in Algeria (36 percent) and Egypt (30 percent) did fewer than four-in-ten citizens favor strengthening economic ties with China. 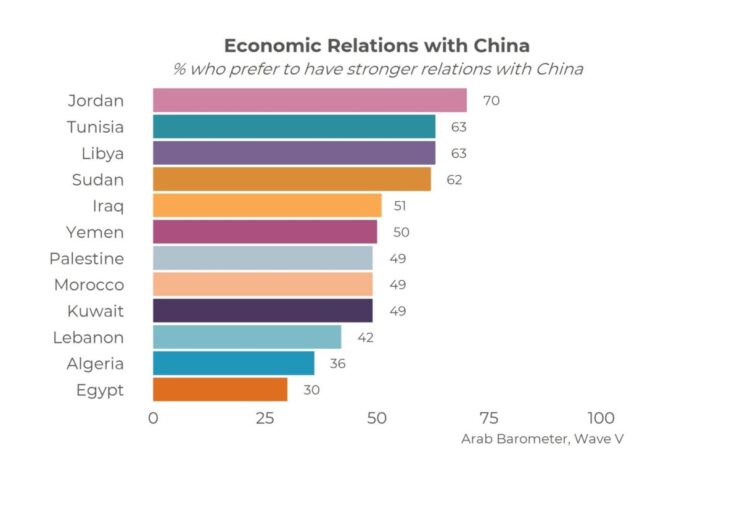 Support for stronger relations with China tends to be higher among elites. Those who have a university degree or above are at least ten percentage points more likely to favor strong ties with China in Morocco, Tunisia, Algeria, Iraq, and Egypt, for example.  However, there is no consistent difference by generation, with views of China being similar among those who are younger and older in most countries.

Beyond closer economic relations, citizens across MENA were also largely supportive of foreign aid from China in 2018-9. In the eleven countries and territories where this question was asked, half or more favored assistance from China in nine cases, including at least six-in-ten in Jordan, Sudan, Yemen, and Palestine. The key exceptions are Libya and Algeria, where fewer than half favor Chinese foreign assistance. 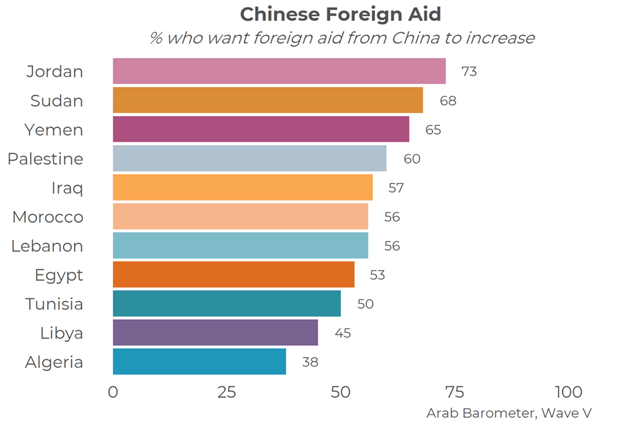 Following the onset of COVID, Arab Barometer conducted its sixth wave by phone given health concerns related to in-person interviews.  Surveys were conducted from summer 2020 to spring 2021 in seven countries every few months. Views of China remained relatively high by spring 2021 in most of the countries surveyed, with majorities saying they had a favorable view in seven of the countries surveyed: Algeria, Morocco, Libya, Tunisia, and Iraq.  Only in Lebanon (38 percent) and Jordan (34 percent) did fewer than half say they viewed China very or somewhat favorably. In Lebanon, these relatively low views are more likely the result of political than economic considerations. Following the financial crisis, Hezbollah sided with a bailout from China as opposed to other political parties that favored working with the IMF. 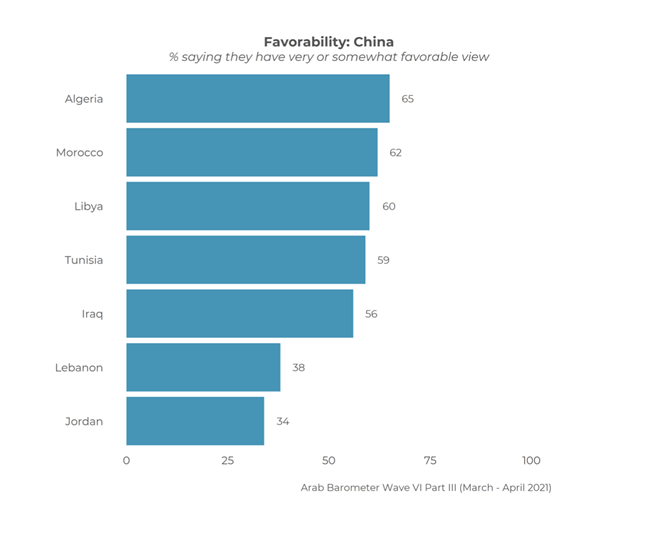 Despite China’s efforts at vaccine diplomacy and promises of foreign assistance to the region, views did not change dramatically during the survey period. For example, in Tunisia, China’s favorability was 55 percent in summer 2020 compared with 59 percent in spring 2021 while in Jordan there was a similar difference of four points over a similar period of time.  Despite China’s overtures to the region and provision of vaccines to many countries, popular attitudes appear relatively unaffected.

Although popular views of China are relatively positive across MENA, evidence from Arab Barometer suggests they are not particularly deeply held.  As part of the sixth wave, Arab Barometer included a question about the degree to which China’s developing economic power represents a critical threat to MENA.  In none of the six countries where the survey was asked does more than about a quarter see China’s economic power as a critical threat.  Lebanese (26 percent) are the most concerned, but only 15 percent in Jordan and Morocco and 13 percent in Algeria hold this view.  Given the influx of largely cheap goods from China, this result may be counterintuitive, especially given that the U.S. is viewed as an equal or more substantial economic threat in all countries surveyed. 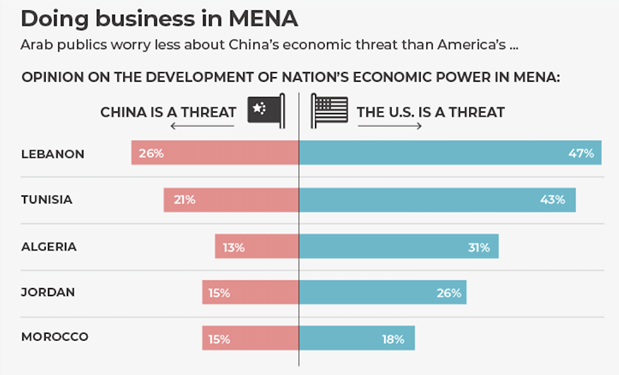 Even though relatively few citizens view China as a threat, there is also not a preference for Chinese economic engagement in MENA.  In the sixth wave, Arab Barometer asked citizens what foreign country of origin they would prefer for a company who was contracted to construct an infrastructure project in their country.  In all seven countries surveyed, a company based in Germany was seen as the most likely to build a project of the highest quality, including by as many as half in Algeria and Libya. In contrast, in no country did more than one-in-five say that China would build the best quality project.  Meanwhile, when asked about the company that would pay the best salaries to the local workforce, citizens were split between picking the U.S. (four countries) and Germany (three countries) as the most preferred country of origin.  In all countries except Iraq, one-in-ten or fewer say a Chinese company would pay the best salaries.

Finally, when asked the country of origin for the company they would most prefer to get the contract, in no country is a Chinese company most preferred. In four countries, a German company is most preferred, with an American company preferred in two (including a tie with Turkey in Jordan), and France preferred in one. Meanwhile, only in Iraq (22 percent) is a Chinese company preferred by more than 15 percent of citizens.  In other words, support for “China, Inc.” appears to be relatively limited in MENA. 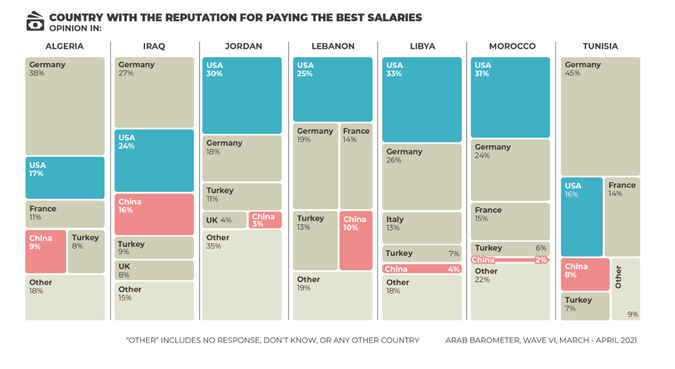 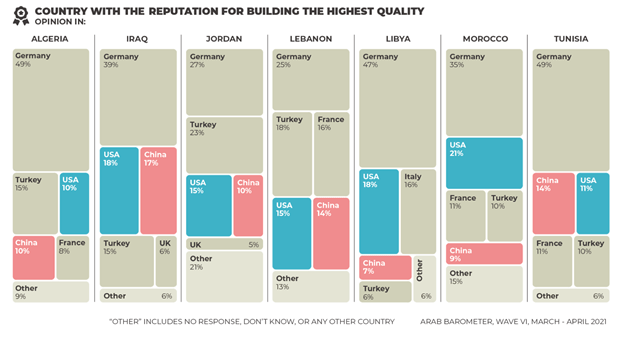 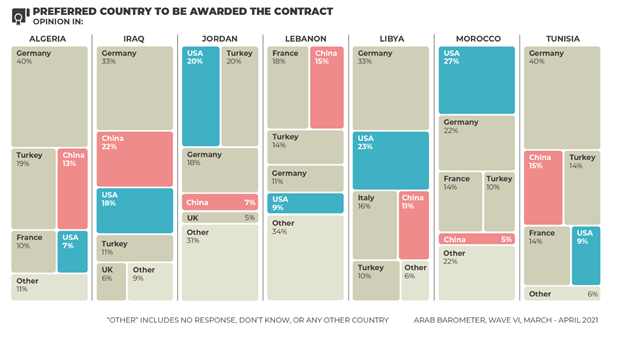 Overall, these results imply that the future of China in MENA is still to be written. As a non-colonial power in the region, there appears to be an openness of those living in MENA toward China. In a region with many citizens looking for a rapid model for economic development, China could also represent hope given the dramatic transformation the country has undergone since the 1980s.  Many MENA citizens hope for a similar transition in their own countries.

Yet, the results also suggest that, at least to date, there is little more than hope and projection being placed on China. In 2019, Arab Barometer asked citizens in Kuwait whether they thought Chinese were good people.  Fully 42 percent said they didn’t know.  Notably, Kuwait is the first country in the Arab Gulf region to establish relations with Beijing, the first to sign up to its Belt and Road Initiative, it has a joint strategic partnership with China, and has more than US$14 billion annually in bilateral trade with China.  Despite these links, the survey results reveal that nearly half of Kuwaitis have no clear image of Chinese citizens. Although this question did not appear in other countries, given their weaker linkages, it is unlikely that their populations would have a substantially clearer view of Chinese citizens.

In short, China has an opportunity in the region but also faces risks to its popularity in the years ahead. As citizens in MENA come into more direct contact with China and its policies in the future, their views are likely to become more entrenched. Elsewhere, support from China has alienated publics, such as in countries like Sri Lanka and Malaysia, where foreign aid projects have not always been viewed as benefiting the local populations.  China’s continuing popularity will depend in large part on its ability to convince MENA publics that its foreign policy and assistance is working for their benefit.  If not, then it is likely that popular support for China will begin to fade in the years to come.