Do urban Arabs support gender equality to a greater extent than rural Arabs do?

Traditional perceptions of gender roles continue to constrain women’s autonomy in household decision-making. Data from the Arab Barometer’s fifth wave of surveys show that 60 percent of Arabs agree or strongly agree with the following statement, “Husbands should have final say in all decisions concerning the family”. The proportions of citizens who agree with husbands having final say, vary by country. Approval is highest in Sudan and Algeria (74 and 71 percent, respectively), while somewhat lower in Lebanon and Morocco (50 and 46 percent, respectively). Beyond such country-level differences, are there individual-level predictors that can account for some of the variance seen in citizens’ support for gender equality across the Arab world? 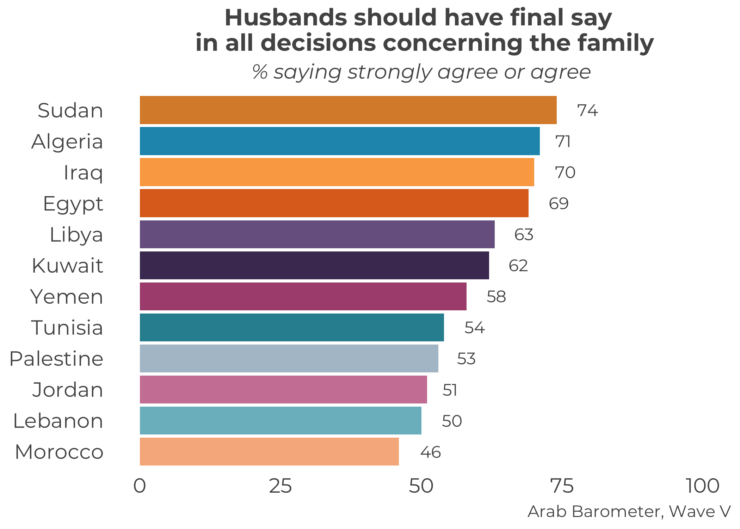 Previously, I have argued that socioeconomic development and attitudes towards gender equality are positively correlated. As the economy grows, living conditions improve and education levels rise. People also experience a greater sense of human autonomy that brings demands for gender equality. However, value shifts do not occur evenly distributed in the entire society. Rather, different social groups have different values. In liberal democracies, for example, highly educated urban women have been at the forefront of the women’s rights movement. Hence, settlement type has often been used to explain variations in support for gender equality. This raises the question as to whether there is a similar rural-urban divide in the Arab World.

Socioeconomic development has historically had important implications on patterns of human settlement. Industrialization led to large-scale migration to urban centers, creating new social classes, such as the bourgeoisie and the working-class, whose values were different to those of traditional classes, represented by landowners and peasants. Changes in the social structure were accompanied by a shift from traditional religious values to rational-secular values. As the old social hierarchy deteriorated, people were no longer subject to traditional social roles and ties, bringing demands for greater autonomy.

Simple proportions show that a slightly higher share of rural citizens agree with the husband’s privileged role in household decision-making, compared to their urban counterparts (63 versus 59 percent, respectively). Though these simple proportions show a correlation between respondents’ settlement type and support for gender equality, this analysis suggests that such a trend could be due to the effects of confounding variables like education. The uncontrolled model with settlement type as a single variable shows statistically significant coefficients for six countries. However, when controlling for education, only three countries remain statistically significant.

Two countries show a rural-urban divide similar to the one in liberal democracies. Urban Iraqis and Moroccans are – respectively 30% and 21% – less likely to agree with traditional household decision-making, compared to their rural counterparts. In Yemen, in contrast, the relationship goes into the opposite direction. Urban Yemenites are 40% more likely to agree with the husband’s privileged role. Given these results, urban centers in some Arab countries are more liberal on gender equality due to the higher concentration of highly educated people in those areas. 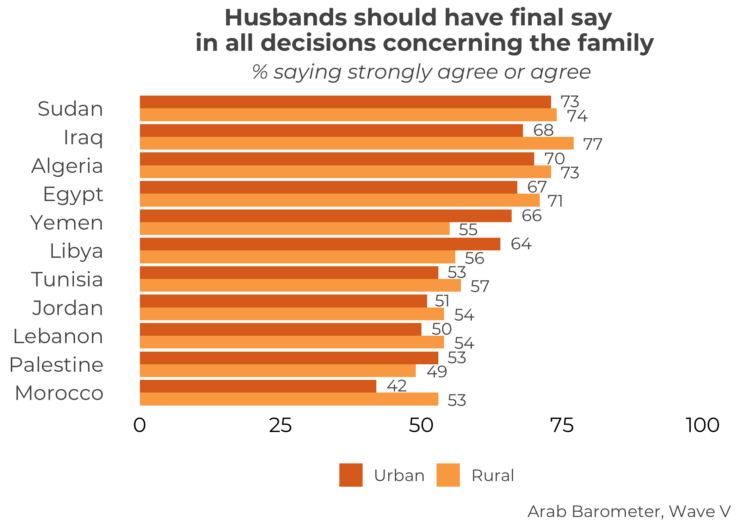 These findings suggest that there is no rural-urban divide on gender equality in most Arab countries. One explanation for these findings may have to do with the different types of urbanization. In most western countries, urbanization was the byproduct of industrialization. In the Middle East, in contrast, urbanization started before the advent of industrialization, when society was still predominantly agrarian. As a result, cities were rather administrative, cultural and commercial centers. Without the social transformation triggered by industrialization, people kept their interwoven network and social ties from traditional society.

However, Arab economies have grown dramatically in the recent decades, so one should see a rural-urban divide on gender equality in the next decades if the underlying mechanism is valid outside a Western context. For example, different levels of socioeconomic development might explain why the relationship goes into the diametrically opposed direction in Yemen, being one of the poorest countries in the world. Further research is required to analyze the relationship between socioeconomic development, different types of urbanization, and their impact on gender values.

Nicolas Schwarz graduated from the University of Oslo with a degree in Political Science and currently lives in Oslo, Norway.