The internet has been touted as an engine for equality because of its potential to expand opportunities across all segments of society, accelerate upward social mobility, and lend voice and platforms to marginalized groups. Yet, despite decades of increasing internet penetration, the proliferation of smartphones, and an expanding internet culture, inequalities in the Arab World remain pronounced, and by some estimates have grown more severe. Data from the latest wave of Arab Barometer surveys indicate that rates of internet usage differ markedly along demographic lines. When controlling for potentially confounding variables, disadvantaged segments of society like women, the elderly, the less educated, and lower income individuals are less likely to use the internet than their male, younger, higher educated, and higher income counterparts. These findings from twelve Arab World countries contribute to a body of evidence showing that though the internet has the potential to mitigate some societal ills, disparate rates of internet usage along demographic or socio-economic lines can actually compound inequalities and contribute to a worrisome digital divide.

The literature generally defines the digital divide as the gap between segments of society “with regard to both their opportunities to access information and communication technologies [ICTs] and to their use of the Internet”. As society has grown reliant on technology and the internet, those lacking digital literacy and access to ICTs face greater challenges and even outright exclusion integrating into an increasingly digitally-dependent economy and society.

Across the Middle East and North Africa (MENA) the proportion of citizens who are offline varies greatly by country – wherein “offline” here denotes respondents who say they never use the internet and “online” denotes those who use the internet at any frequency, including as little as about once a month. 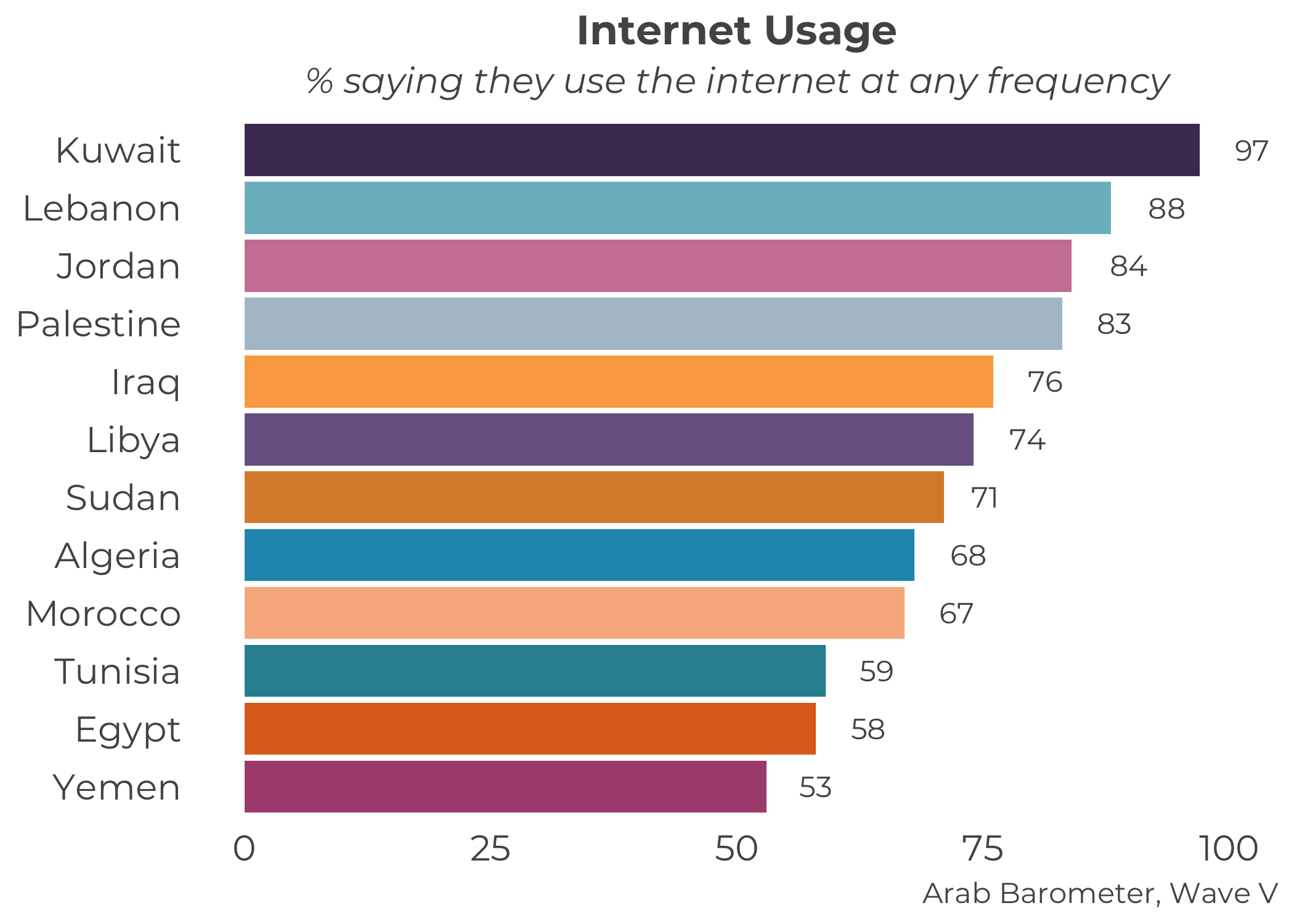 The divide across MENA is not just within countries, but also across countries. In Kuwait, one of the wealthiest countries in the world, only 3 percent say they never use the internet. This is unsurprising given the Arab Gulf has some of the highest rates of internet penetration in the world, exceeding those found in the United States and various Western European countries. Meanwhile, across the Levant the rates of offline citizens are also relatively low. Fewer than two-in-ten citizens in Lebanon (12 percent), Jordan (16 percent), and Palestine (17 percent) say they never use the internet. In contrast, roughly a quarter of respondents in Iraq (24 percent), Libya (26 percent), and Sudan (28 percent) are offline, while over three-in-ten in Morocco (31 percent) and Algeria (32 percent), and over four-in-ten in Tunisia (41 percent) and Egypt (42 percent) say the same. Most notably, in Yemen, one of the poorest countries in the world, the proportion of offline respondents roughly equals the rate of online respondents (47 percent versus 53 percent, respectively).

Beyond wealth, there are a number of other factors that may contribute to the discrepancy in internet usage across MENA. As Yemen enters its fifth year of civil strife, citizens there face internet shortages and connectivity issues due to both deteriorating infrastructure and politically motivated censorship and blockages. By contrast, from 2014 to 2018 Morocco and Tunisia increased their mobile internet penetration rates by 15 percent and 18 percent, respectively. However, beyond such country-level differences, are there individual-level predictors that account for some of the variance seen in citizen’s internet usage across the Arab World?

Simple proportions show that across the region several key variables, like age, gender, education, income, and settlement type (urban, rural, or refugee camp), correlate with internet usage. Yet these proportions do not account for interactions across variables: for instance, urbanity is highly correlated with education levels. Fitting a regression model helps address this issue and isolate which variables are in fact most predictive of internet usage by controlling for key covariates simultaneously.

Unsurprisingly, across the countries surveyed, older individuals are less likely to use the internet. For instance, the average, religious 30-year-old Egyptian man with a basic education is 52 percent likely to be an internet user, compared to 32 percent likely if he is 40 years old. Alternatively, this can be viewed as a 58 percent decrease in the odds of being an internet user for a ten-year increase in age, holding all else equal. This trend may stem from greater apprehension among older adults with respect to adopting newer technologies, less confidence in their ability to successfully use these technologies, or that such technologies are often not built with the needs of older users in mind. AB data show that in many countries this digital divide between young adults (18-29) and older individuals (60+) is severe. This generational discrepancy is most extreme among Egyptian young adults, who use the internet at a rate that is 82 percent higher than Egyptians who are 60 or older. In comparison, young adults in Kuwait use the internet at a rate 20 percent higher than older Kuwaitis. 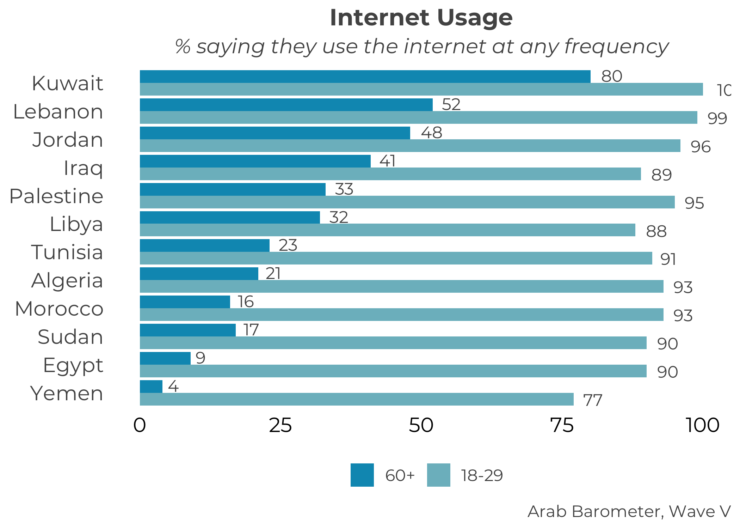 The digital gender divide shows a similar imbalance. When controlling for other variables, we see a 56 percent decrease in the odds of being an internet user for women as opposed to men. Women face immense barriers to full participation in the digital sphere, and these barriers are not dissimilar to those found in other domains. In fact, they are informed by and representative of real-world phenomena. Cultural norms, gender roles, biases, and stereotypes often dissuade and even prevent women from accessing the internet, gaining digital literacy, and participating in the digital economy or society. According to the International Telecommunication Union, when compared to other world regions the gap between men and women with respect to the internet penetration rate is largest across Arab States. Such disparities coupled with the region showing the world’s worst performance in narrowing the gender gap, paint a troubling picture of the present situation. 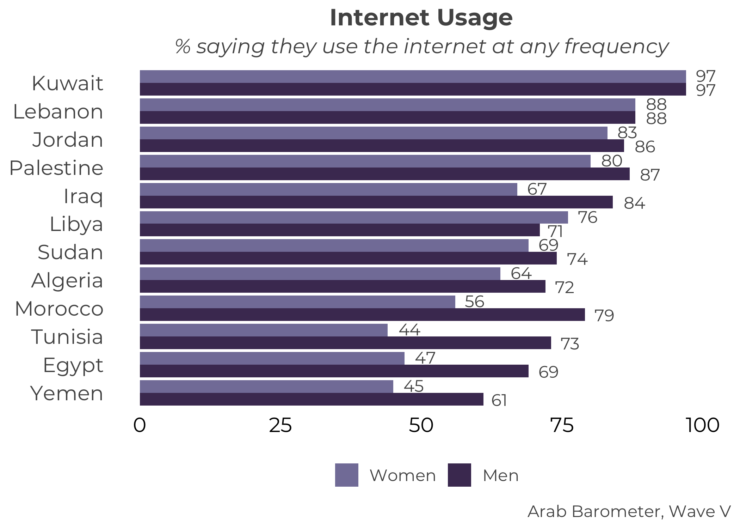 In addition to age and gender, educational attainment and income also prove to be significant predictors. As educational levels and income decrease, the propensity of an individual to be online decreases as well. Interestingly, though a cursory look at simple proportions shows a correlation between respondents’ settlement type and whether they are internet users, this analysis suggests that such a trend could be due to the effects of confounding variables like education or income. 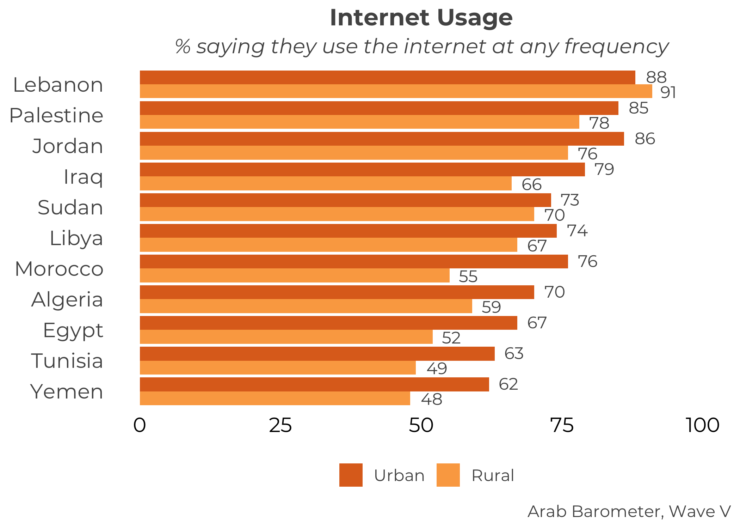 Identifying inequalities in internet access and determining which populations could benefit from targeted interventions are necessary but not sufficient steps toward comprehensive digital inclusion. In addition to obstacles preventing their access and usage of the internet, marginalized groups are often more vulnerable than their counterparts once online. Across the world, older individuals are more likely to fall victim to internet fraud and online financial schemes, women are 27 times more likely than men to face online abuse, and studies have found that those with lower levels of education and income are more likely to believe and share misinformation online. With doctored media, disinformation campaigns, doxing, and sexual harassment permeating our digital spaces, it is clear that media literacy and privacy consciousness are a critical cornerstone of healthy internet usage. As we reckon globally with balancing the internet’s threats and benefits, we must ensure that vulnerable populations have equal opportunity to reap these benefits without bearing the brunt of the internet’s failures and injustices. Only then can we consider our efforts to bridge the digital divide successful.