Youth in the Middle East and North Africa 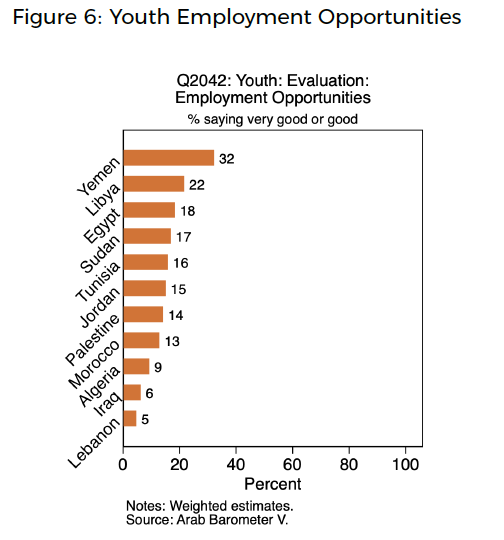 Individuals between the ages of 15 and 29 account for roughly 30 percent of the population of the Middle East and North Africa (MENA).1 The beliefs, attitudes, and preferences of this large and growing segment of the population has the potential to shape and drive the region’s future. Yet, widespread youth discontent about their economic prospects poses a significant challenge. Youth unemployment rates across the region remain high and there is broad frustration with government efforts to create employment opportunities.2 Though satisfaction with the state education system varies greatly across countries, youth are less satisfied than are older generations.

Youth also question if they have the ability to voice their frustrations to the government. In nearly all countries, less than half say the right to freedom of expression is guaranteed while half or less say they have the right to demonstrate peacefully in all countries. This combination creates conditions where youth across the MENA region, far more than older age cohorts, are considering emigrating from their country, primarily to Europe, North America, or GCC countries. Unsurprisingly, many cite economic reasons as the main impetus for leaving.

However, youth differ from their older counterparts not only in terms of greater frustration with the existing system. Relative to older generations youth also tend to be less religious, less interested in politics, and more likely to be engaged in social media. Generational differences are particularly stark in Morocco where youth attitudes diverge substantially and dissatisfaction with the overall state of affairs is quite salient.

Meanwhile, on gender issues, most youth tend to be supportive of equal rights for women. Majorities say women have the right to be the head of government and to receive an education. Yet, the same does not hold true for equal inheritance rights with minorities saying women should receive the same as men in most countries. Additionally, this generation cites low levels of support for women playing equal roles in society, with most saying that men make better political leaders and stating that husbands should have the final say in family matters.

These are among the key findings from 11 nationally representative public opinion surveys conducted across the Middle East and North Africa by the Arab Barometer from September 2018 – April 2019. The surveys included more than 25,000 face-to-face interviews in the respondent’s place of residence and have a margin of error of ±2 percent in most countries.3