Why Do They Hate America(ns)?

In reaction to the terrorist attacks on the Twin Towers on September 11, public debates droned an ongoing refrain of ‘why do they hate us?’. Consequently, although obviously not every Arab person who dislikes America commits or even supports terrorist attacks, September 11 brought about a surge in scholarly attention to the causes of anti-Americanism.

Generally, it is argued that­ we should look for the cause in American interventionism. American foreign policies would (be perceived to) harm Arab countries and their citizens, engendering a widespread dislike of not only particular American policies but also the United States more generally. At the same time, it is said that Arab people direct their hate solely towards America, the country and its policy, not towards Americans, the ordinary citizens. Yet, few works have empirically investigated the degree and causes of such societal anti-Americanism, as the focus generally is on a dislike of the United States as a political entity.

They Hate Americans Too 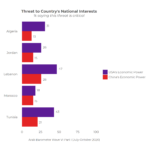