Is the ‘Abraham Accord’ already unravelling?

This month’s announcement by President Donald Trump that diplomatic relations between Israel and the United Arab Emirates (UAE) will be normalised took the world by surprise, not least because it was a well-kept secret in a usually leaky White House. Horrified traditionalists in the Arab world suspect many of their forefathers will be turning in their graves on seeing this public flirtation with Israel. But for others this move is a perfect example of the ancient proverb “my enemy’s enemy is my friend”. In this case the “common enemy” is Iran and in what appears to be a classic display of an unholy alliance, Israel and the UAE have buried their hatchets and old rivalries under a Persian carpet.

The UAE now joins Egypt and Jordan to make the third Arab state to recognise Israel. For the Israeli Prime Minister, Benjamin Netanyahu, currently under the cloud of an imminent trial for bribery and fraud, the normalisation of diplomatic ties between the two countries, dubbed the “Abraham Accord”, is hugely symbolic, leaving him as one of only three Israeli leaders to have brokered a peace agreement with an Arab state. “A revolution is taking place in the Arab world that is quietly moving the Middle East’s tectonic plates in ways no one ever thought possible”, wrote the president of the World Jewish Congress, Ronald Lauder, in the Arab News. “The old broadside attacks against Israelis by almost all Arab countries have quietly dissipated.”

On the Arab side, Sheikh Mohammed bin Abdul Karim Al-Issa, secretary-general of the Muslim World League, sought to quell fears in the Muslim world about the Abraham Accord, saying “With our Jewish brothers, we have concluded agreements and mutual cooperation, and we love them and respect them greatly.”…

Public Misgivings of Private Affairs: Trust in Private Institutions of the Arab World 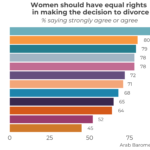