Back to the Future: Iran’s Normalization and Biden’s Middle East

The exit of Donald Trump from the White House is being welcomed by many as a return to normalcy in US politics. However, what exactly that normalcy is, and how useful it is, depends on whether you look inside or outside the US. Trump, in many ways, has exemplified many long-term modes of seeing the world that have characterised the American elite for decades. It’s unlikely that Biden’s presidency will differ greatly from that tradition.

After a long few days of election news, Trump’s exit was more bizarre than dangerous. As it becomes overwhelmingly likely that Biden has won the presidency, Trump tweeted that a press conference would be held at Four Seasons Total Landscaping in Pennsylvania. Richard Hall, a journalist for the Independent, assumed Trump was referring to a Four Seasons hotel in Philadelphia. It turned out, however, that Trump’s legal team would convene at a small landscaping company on the outskirts of the city. By the time Biden’s victory had been announced, the press had already begun to dwindle, and a typically enthused Rudy Giuliani gave a speech to a makeshift crowd of Trump supporters and distracted journalists.

The exit of Donald Trump from the White House is being welcomed by many as a return to normalcy in US politics.

There is a sense from Trump’s recent appearances that he is longing to be free from the trappings of power. In a rally in late October, Trump, looking at trucks that were parked close to the fences enclosing his supporters, said “nice trucks… You think I could hop into one of them and drive it away? I’d love to do it. Just drive the hell out of here. Just get the hell out of this.”

A staffer inside the Trump team during election week told New York Magazine that Trump “wants to lose. He’s out of money. He worries about being arrested. He worried about being assassinated,” they said. “It hasn’t been a great experience for him. He likes showing people around the White House, but the actual day-to-day business of being president? It’s been pretty unpleasant for him.”

Like Trump it seems, people around the world are unhappy with him being president. Furthermore, a survey conducted by Arab Barometer suggests that people across the Middle East and North Africa doubt whether a Donald Trump or Joe Biden presidency will have any positive effect on the region. Conducted before the election on 3 November, the survey found that more people responded that they didn’t know or that that a new US president would make no difference, as opposed to showing a preference for either Trump or Biden.

Despite Trump’s son, Donald Trump Jr., suggesting that most of the world, apart from Mexico, Liberia, India and China, would have backed the Republican incumbent, Trump is one of the world’s most unpopular leaders. An average of 12% of Arab citizens were in favour of Donald Trump’s policies in the region. In comparison, Vladimir Putin has an approval rating of around 28% and Turkey’s president Recep Tayyip Erdoğan was seen favourably by 51% of those responding to the survey. Chinese President Xi Jinping was liked by around a third of respondents.

Those asked in Tunisia, Morocco, Jordan and Algeria all preferred a Biden win to a Trump re-election. In Jordan, where only 3% said that they favoured Trump, an equal number said that they thought both Trump and Biden were as bad as each other, with another 50% responding that they didn’t know.

Although Biden’s election signals a return to political normalcy in the US there is a sense that, for millions around the world, long-held US vision on military and diplomatic muscle will still be markers of the new administration. Trump’s actions on Yemen, Palestine and Iran have had a significant impact on the region. How will Biden’s policies likely differ from his Republican predecessor?… 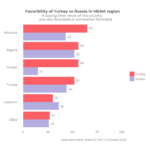 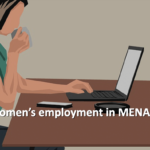 Remote work and women’s employment in MENA: opportunity or pitfall? 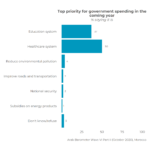