Why do individuals vary in their desire to emigrate? Why are some willing to emigrate irregularly? My recently published open access article in Comparative Migration Studies tests four theoretical approaches to these two questions—socio-demographics; economic and political context; access to migrant networks; and psychological factors—across 12 countries in the Middle East and North Africa.

To do so, it uses logistic regression analyses, as well as descriptive data, based on data from the Arab Barometer, which has conducted international standard social scientific surveys across the Middle East and North Africa every two years since 2006 with sample sizes of around 2400 per country based on area probability sampling and face-to-face interviews. Uniquely, the penultimate, 2018/19 round of surveys asked not only about desire to migrate but also about willingness to do so irregularly, as well as a range of socio-demographic, attitudinal and behavioral indicators.

Trends in aggregate propensity to migrate by country over time, as reported by the Arab Barometer, are displayed over time below in Figure 1 and analyzed in the article. 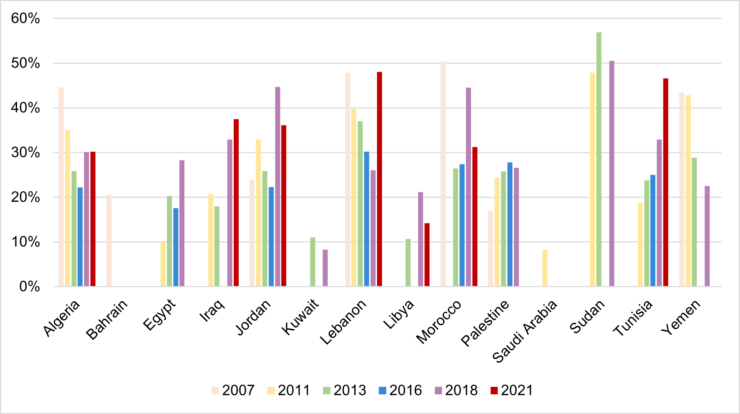 Notes: Weighted. Arab Barometer I, II, III, IV, V, VI. Percentage responding “yes” to “Some people decide to leave their countries to live somewhere else. Have you ever thought about emigrating from your country?”

In Figure 2, we differentiate between the proportion of those who would not consider emigrating without official papers (i.e. to emigrate irregularly) and those who would be willing to do so, by country in ascending order of willingness to emigrate without papers.

Figure 2. Distribution of desire to emigrate and willingness to do so without papers by country, 2018/19 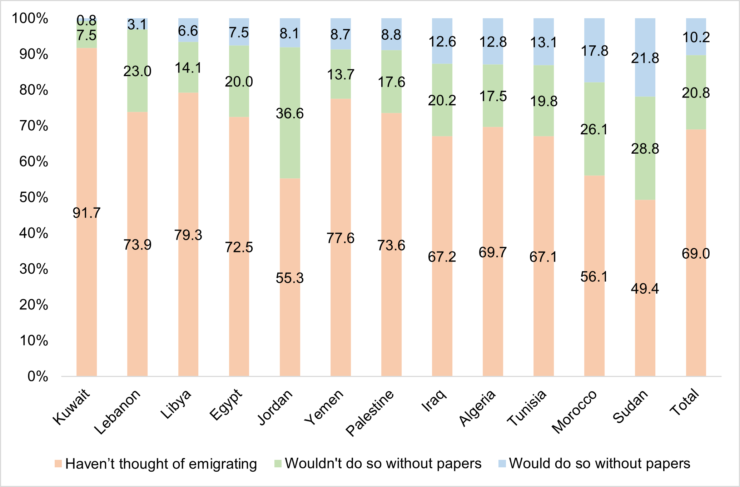 Notes: Arab Barometer, 2018/19. Weighted. See Figure 1 for question on desire to emigrate. Those who responded “yes” were then asked “Would you consider leaving [COUNTRY] even if you didn’t have the required papers that officially allowed you to leave?”. “Total” figure country-level average.

Logistic regression analyses show that the most prevalent factors increasing the likelihood of wanting to migrate are youth, university education, being male, and stress levels as well as negative economic and political perceptions, being unmarried, trust in social media, receiving remittances, and low religiosity. Notably, economic factors such as unemployment and income are shown to rarely have an effect.

By contrast, the determinants of being willing to emigrate without papers are fewer and distinct: gender and lower income especially as well as lower education and negative economic and political perceptions. Altogether, these factors are shown and linked in generalized terms for the MENA region in Figure 3. 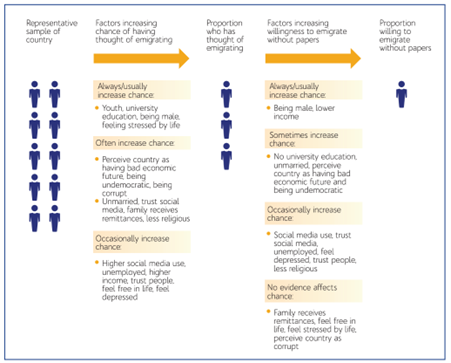 This article makes five contributions. First, it conceives of and tests (irregular) migration as a two-step process—first, wanting to emigrate in general and, second, being willing to do so irregularly—and so disentangles the determinants of each. Second, by covering 12 countries the study highlights commonalities across country contexts and provides a generalizable model of the two-step process, shown in Figure 3. Third, it shows that objective economic indicators like income and employment status have weak predictive power when other socio-demographics, political and economic perceptions, access to migrant networks, and psychological variables are controlled for, contradicting with stated reasons for thinking of emigrating as shown below. In the discussion, potential reasons for this seeming contradiction are offered. Fourth, the predictive power of psychological variables is highlighted, with feeling stressed a particularly prevalent predictor of thinking of emigrating and interpersonal trust in some countries shown to predict willingness to do so without papers. Fifth, by taking a cross-country approach, several countries are shown to have typical determinants of emigration, and a few are shown to be atypical in the effects of socio-demographics—Iraq, Kuwait, Libya, Sudan, and Yemen—highlighting the seeming ability of extreme wealth (in Kuwait) and war to interact with and even reverse the most fundamental determinants of migration, a relationship that should be further investigated.

Funding: This work was supported by the EUROMED Migration V Programme, funded by the European Union (EU) and implemented by the International Centre for Migration Policy Development (ICMPD), and originally appeared in this ICMPD policy report.

James Dennison is a political scientist and a part-time professor at the Migration Policy Centre of the European University Institute in Florence. The views expressed in this piece are his own.