Is COVID-19 compelling Arab citizens to surrender freedoms to their governments?

Efforts to control the spread of covid-19 have prompted governments across the Arab World to pursue aggressive strategies — from closing international borders and imposing curfews, to restricting movement between cities and expanding digital surveillance of citizens. Such measures expose not only the tension between public health safeguards and protecting individual civil liberties; rather, they also reveal the threat of opportunistic government overreach under the pretense of the coronavirus.

The sixth wave of Arab Barometer surveys asked citizens across five Arab countries—Algeria, Jordan, Lebanon, Morocco, and Tunisia—their views on government restrictions of assorted freedoms during a public health emergency. Support for government restrictions on speech and movement, censorship of the media, and monitoring and tracing of citizens varies both across and within countries, as well as by age, gender, and citizens’ levels of trust in the government. Overall, the younger generation are more accepting of restrictions than are their older counterparts, women are more open to government limitations on movement, and those with greater trust in the government show more tolerance of restrictions. However, despite this variation in attitudes, a plurality, and in most cases a clear majority, of respondents consider a range of government restrictions sometimes or even always justified within the context of a public health crisis.

Free speech and the media are necessary not only for ensuring widespread access to accurate information throughout a public health crisis, but are also important mechanisms to advocate for government accountability. Yet, Arab publics are generally sympathetic to restrictions in both these domains. Though limitations on free speech are the least popular restriction among those asked about in the survey, nonetheless over half of respondents cite some level of support in nearly every country surveyed. Two-thirds of Algerians and Moroccans (66 percent in each) say it is either sometimes or always justifiable for the government to limit freedom of speech during a public health emergency, followed by over half of Jordanians (59 percent) and Tunisians (53 percent) saying the same. Only in Lebanon do fewer than half of respondents cite support for such restrictions to free speech (47 percent). With respect to restrictions on the media, roughly seven-in-ten citizens in Jordan (71 percent), Morocco (70 percent), and Algeria (69 percent), in addition to six-in-ten Tunisians (63 percent), and over half of Lebanese (56 percent) say that government censorship of the media is sometimes or always justifiable during a public health emergency.

Indicators of Support for Government Restrictions: Age, Gender, and Trust

What distinguishes individuals who support such restrictions from those who do not? One of the most salient indicators is age, with younger adults (18-29) more likely to voice support for government limitations than are their older counterparts (60+). This trend holds across all countries and for all restrictions, with the exception of Jordanian and Lebanese youth and restrictions to movement or government tracing, respectively. Though older Jordanians are indeed less likely than the younger generation to support restrictions on speech and media, they are slightly more receptive than younger adults are to restrictions on movement (78 versus 76). The gap is more sizable in Lebanon with respect to government monitoring and tracing of citizens — 80 percent of those 60 or older support such measures, compared to 70 percent of younger adults saying the same. Interestingly, on average, young citizens deviate most from older citizens with respect to censorship of the media, with those aged 18 to 29 showing more openness than those over 60 to the government censoring the media either sometimes or always during a public health crisis. Given that individuals under the age of 25 account for over half of the population across the Middle East and North Africa, their beliefs about the role government should play during crises represent not only the preferences of a significant portion of the region, but also reflect burgeoning trends and attitudes that will influence the region’s future.

Though gender is not a meaningful indicator of support for restrictions on speech or the media, women are more likely than men to support restrictions to movement and government efforts to trace and monitor citizens. The gap between men and women is starkest for the latter — women in Tunisia and Morocco support government monitoring of citizens’ movement at rates 12 and 11 percentage points higher, respectively, than do men. The gender divide is smaller, though still apparent, in Lebanon (9 percentage points), Jordan (4 percentage points) and Algeria (4 percentage points). Gendered differences with respect to movement and restrictions thereof could explain this discrepancy: Women are already more likely than men to face de jure or de facto restrictions on their movement, thus women may be more accustomed to (and receptive of) curtailments of this sort. 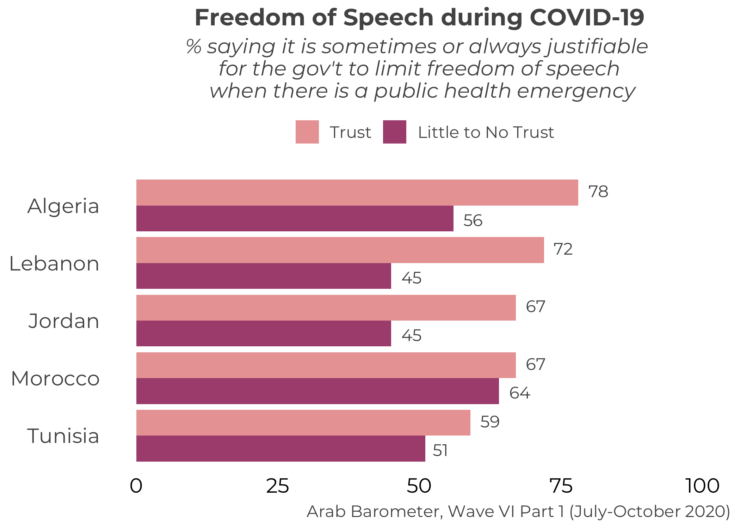 Governments play a critical role in curbing the spread of covid-19 — containing rampant misinformation about the virus, managing testing and vaccination, and ultimately ensuring citizen’s safety and security. But, in a region all too familiar with government corruption and durable authoritarianism, the heavy hand of government during times of crisis can set dangerous precedents. The pandemic will eventually end, but the corrosion to civil liberties could prove more resilient and enduring than the virus itself. In the face of government overreach and restrictions that often have no clear expiration date, citizens of the region must be cautious and vigilant.

The information and opinions expressed within the content are solely the author’s and do not necessarily reflect the views or opinions of Arab Barometer or its affiliates.