Education in Tunisia: Past progress, present decline and future challenges

Since its independence in 1956, Tunisia has placed a special emphasis on the development of the education sector. Shortly after independence in 1959, the government implemented an education plan, in which education was approached as a national investment and key determinant of the nation’s economic growth. After extensive evaluation of the strengths and weaknesses of the sector over several years, a National Education Commission (NEC) was set up in 1967 to provide guidance and recommendations. These recommendations were approved by the government and incorporated into the formulation of national development plans.[1]

Achieving the different objectives entailed a well-balanced and integrated development at all levels of education: an increase in primary and secondary education, and an increased emphasis on teaching science and mathematics. The Commission was also aware that it was essential to have qualified teaching staff to pursue these objectives, to be provided by the university. Thus, post-independence reforms in higher education concentrated on producing a labor force for the new Tunisian administration, one that would be able to build a modern economy – consistent with independence leader Habib Bourguiba’s vision. As a result, public spending on education expanded to a degree that made Tunisia one of the biggest education spenders in the Middle East and North Africa (MENA). Tunisia currently spends more than one-fifth of the state budget, which corresponds in 2015 to 6.6 percent of its Gross Domestic Product (GDP) on education.[2]

The expansion of education has had undeniable and enduring positive effects on the economy, on health, on females’ socioeconomic status and recently on politics, in the peaceful transition to democracy after the revolution[3]. Activist educated women have played a vital role in countering religious extremism.[4] Additionally, the education system has created an educated Tunisian elite that is widely sought-after in Europe, Canada and Gulf States.[5]

Today, however, Tunisia is facing a severe learning crisis among the majority of its students. The rise in the quantity of graduates was not accompanied by a commensurate improvement in quality. Given the vast amounts invested, the return on investment (in terms of student outcomes) has been unsatisfactory, and the standard of education has declined drastically according to international metrics such as the Program for International Student Assessment (PISA) and the Trends in International Mathematics and Science Study (TIMSS). In the 2015 PISA evaluation, Tunisia ranked 66th out of 70 participating countries[6] and the majority of the participating students scored below the proficiency level 1.[7] 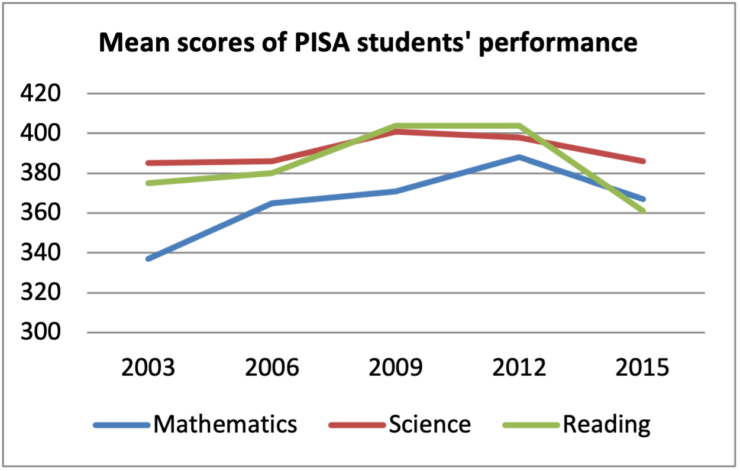 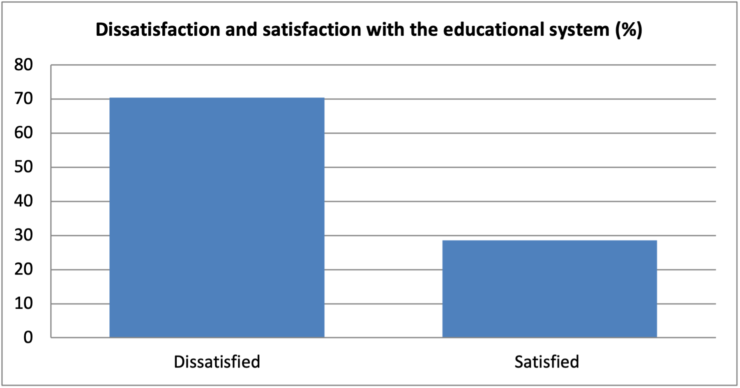 Historically, the education sector in Tunisia has witnessed several major reforms. In 1958 the Tunisian Government sought to unify and nationalize the education system, divided the system into three cycles (primary, secondary and a higher education), and made education compulsory and free for all children.[8] The late 1960s witnessed the Arabization of the primary education curriculum, granting primacy to the Arabic language and making it the language of all disciplines. French became a second language, a language of information and communication that gives access to a scientific and technical culture. Around the same time, the Arabization of technical and scientific education began and has constituted an important feature of education policy.[9] Since 1989, further legislative reform of the education sector was introduced, aiming to enhance the standard of education and to create the best possible balance between training and employment. The reform was formalized by Law No 91-65,[10] the purpose of which was to reinforce the principle of free education at all levels of education and the implementation of basic education. The latter was divided into two cycles: the first lasting six years and the second lasting three years. All subjects related to arts, sciences and technical education were to be taught in Arabic at all grades of basic education.[11] As for higher education, the LMD (Licence-Master-Doctorat corresponding to Bachelor-Master-PhD) reform was introduced in response to the development of the European Higher Education Area in 1999 under the Bologna Declaration adopted by twenty-nine European countries. The aim of the reform was to ensure the quality of higher education, to encourage student and teacher mobility, to facilitate both the equivalence of diplomas and youth integration into the labor market.[12]

With this as a backdrop, segmenting the dissatisfaction data along different age groups yields the following results: More than 71 percent of the respondents between 18-36 are dissatisfied by the education system. These respondents have been the primary targets of two of the above reforms (basic education and LMD reforms). Additionally, 73 percent of those aged between 37 and 52 who have been the primary target of Arabization are dissatisfied with the education system. Their dissatisfaction reveals that the successive reforms passed in recent years have not had the desired impact. 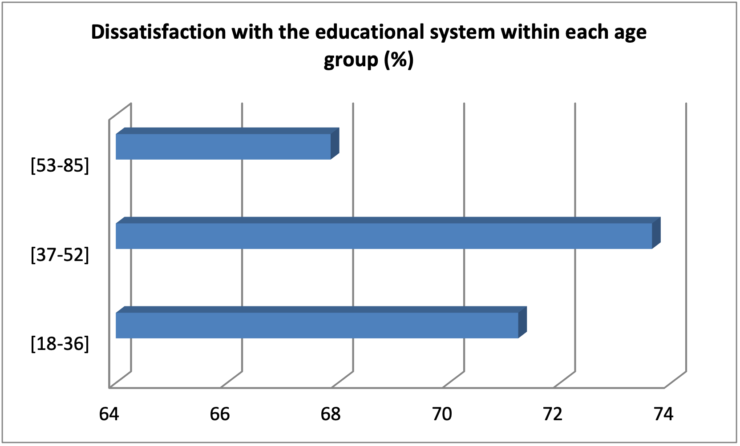 In addition, the data reveal that dissatisfaction with the educational system within each educational level exceeds the 70 percent for those having basic education and above. Respondents with MA degrees and above are the most disappointed.

It is not surprising that the highest rates of discontent are found in the governorates of Gabes, Kebili, Sidi Bouzid and Tataouine, with more than 80 percent of the respondents dissatisfied with the education system. This regional frustration can be explained by a variety of reasons: high school drop-out rates, fewer qualified primary, pre-secondary and secondary school teachers, low rates of admission to “prestigious“ Tunisian universities  and high unemployment rates.[13] 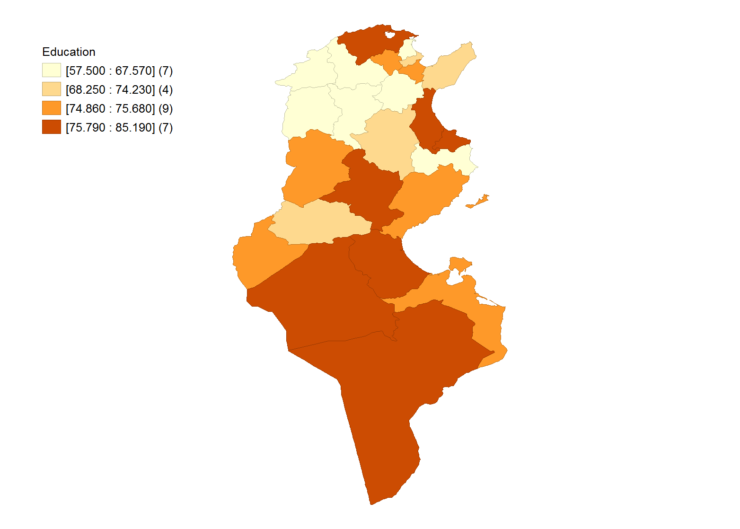 Despite their dissatisfaction with the education system, Tunisians report that education must remain a top priority (after health) for government spending. 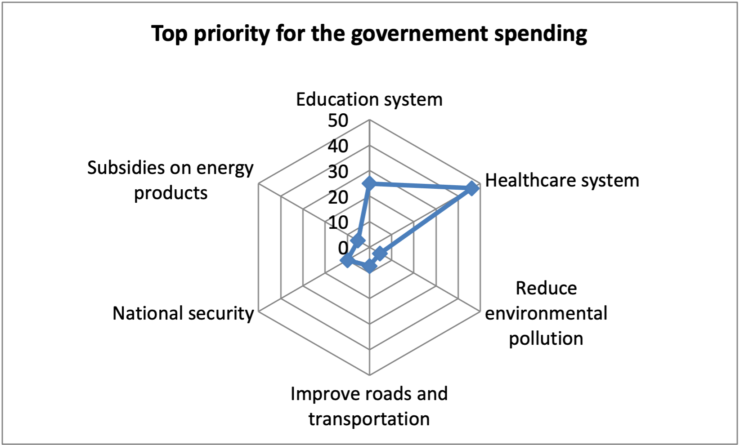 The COVID-19 pandemic has exacerbated the crisis in education. In an attempt to curb the spread of the pandemic, schools were closed for six months (from 12 March to 15 September 2020) with very limited online instruction and the cancelation of third-term internal evaluations. Back to school this academic year (2020-2021), primary, pre-secondary and secondary school pupils attended school on alternate days to avoid crowded classes. As a result, the curriculum has been lightened, but without giving up the fundamentals. The severe disruption is felt by many families, as 47 percent of respondents say that the impact of the COVID-19 pandemic on children’s education is extremely negative, while 27 percent believe it is moderately negative. 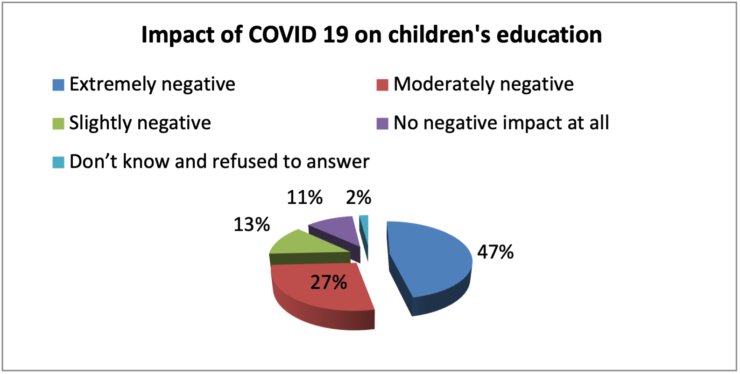 To a large extent, the current disappointment with the education system is a function of the economy as a whole, since Tunisia has failed to make tangible economic progress in nearly a decade. Thus, the education crisis cannot be solely addressed through reforming the education system. Nevertheless, the education sector faces many different challenges today. Primary among those is the inability of the Ministry of Education fulfill the sector’s development needs due to a huge shortage in capital investment. Moreover, the interruptions attributable to COVID-19 may not just be a short-term problem but will also have long-term implications for the affected cohorts and are likely to exacerbate existing inequalities.  Tunisian decision makers should develop a strategy to address this learning deficit.