Jordan, like much of the rest of the world, has struggled to manage the challenges and difficulties 2020 delivered. The country’s reeling economy was dealt a crippling blow by the closures and restrictions related to the spread of the COVID-19 pandemic. The tradeoff between economic prosperity and public health seemed to have initially been worthwhile, as Jordan’s performance in combatting COVID-19 was stellar from March until early September. However, the country’s stamina was expended during those six months, and soon enough public efforts to combat the disease waned. October and November saw Jordan’s case count and daily death toll from COVID-19 shoot up, amidst one government’s literal resignation and the other’s figurative one. It is against this backdrop that less than thirty percent of Jordanians headed to the polls to elect members of the nineteenth parliament, a historically low participation rate that matched the predicted voter turnout.

For Jordanians and international observers alike, the government’s failure to battle the second wave of COVID-19 was swift—but in hindsight should not have been surprising. The previous Jordanian minister of health declared in June that COVID-19 “shriveled up and died,” thus reflecting the government’s shortcomings in communicating and managing expectations all at once. Moreover, the Jordanian government’s efforts were not squarely placed on combatting the disease. Like most authoritarian states, Jordan declared a state of emergency to pass defense laws that, while ostensibly aimed at addressing the COVID-19 challenge, significantly curtailed expression and dissent. With its political and social capacity overstretched, and in a hostile local and global political and public health climate, why did Amman insist on holding general elections for its lower house of parliament that were bound to entice less than a third of the electorate to vote? 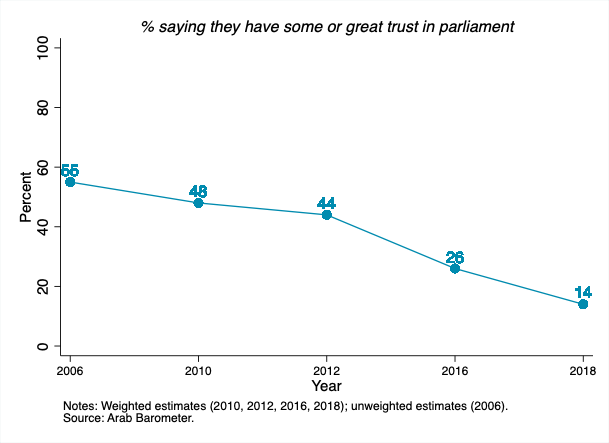