Are Islamists in the MENA more Pro-Democracy than Seculars?

The recent decades have witnessed an increase in the visibility of political parties with conservative backgrounds in the Middle East and North Africa (MENA) region. These parties have had varied experiences in government, ranging from subordination (E.g the Muslim Brotherhood in Egypt) to power-sharing (e.g Ennahda in Tunisia) to dominance (the AKP in Turkey). These varied experiences were shaped by the parties’ capacities to maneuver within the political space, encouraging scholars to focus on the interplay between “seculars” and “Islamists” to understand governance dynamics. As an extension of these debates, two famous commentators just expressed a frequently cited view. Shadi Hamid, a Senior Fellow at Brookings Institute, and Mustafa Akyol, a Senior Fellow at CATO, stated that “Islamists are more pro-democracy (in a procedural sense) than secularists in the Middle East.” Does such a claim have an empirical basis? Luckily, the survey research available can help answer this question.

Perhaps the first point of departure should be defining the two categories. The most common definition of Islamism is “a shared commitment to the implementation of Islamic Law in all spheres” (Schwedler, 2005). Secularists, on the other hand, is the term often used to describe people who adhere to secular principles, which may include nature, reason, and science without recourse to religion. Considering that political organizations are the major venues through which individuals can advocate for implementing Islamic law, I consider the preference for religious parties as a proxy for Islamism. Then I utilize Arab Barometer Wave V data, collected in 2018 and 2019, to compare the attitudes of respondents who prefer religious-oriented political parties and non-religious-oriented political parties towards democracy. By doing that, I show how the claim that “Islamists are more pro-democracy than secularists” is, in fact, not supported by evidence. That being said, I do not claim that secularists are more (or less) committed to procedural democracy. In fact, there are major problems with lumping different constituencies in Arab countries, or MENA in general, under the two umbrellas (Islamist and secularist). I will start with the problems of generalizing across these two constituencies before evaluating the claim empirically.

To begin with, arbitrarily attributing “secularist” and “Islamist” labels for defining groups is problematic. In fact, in the Arab World people who share norms associated with secularism often prefer not to use the term secular- العلماني- derived from the root عالم-worldly– in describing themselves. They rather define themselves as -المدني-, meaning “civil” derived from the root مدن-to urbanize-. Similarly, “Islamists” may not be a very useful terminology for classification as some religious-oriented movements explicitly renounce their attachment from political Islam, which may extend to the individual level as well. Given that individuals do not utilize these terms in describing themselves, it is a question mark whether scholars studying the region should do so.

Some limitations exist pertaining to data as well. First, preferences for religious/non-religious parties are crude and imperfect ways of measuring predispositions towards Islamism and secularism, which can have different dimensions. Yet, political orientations constitute a more appropriate framework for conceptualization rather than alternative factors associated with religious orientations, such as praying frequency. Lacking alternative cross-national means, the attitudes towards democracy remain the most appropriate measure available to examine individual predispositions on democratic governance. Second, the attitudes are heavily dependent on national context and might change through new developments. Hence, the generalizability of findings would be limited. Third, attributing differences to the groups as wholes (ex: if the difference is positive, X is more pro-democracy than Y), misses out the variation and clusters within groups, and the fact that many within each group still prefer the variable of interest, democracy. I am inclined to compare differences only because the commentators do so.

What does the data say?

A high level of variation exists for the preference of democracy among religious party supporters. The highest level of support comes from Jordan (75.5%), Tunisia (68.3%), followed by Libya (67.5%). In contrast, the lowest levels of support come from Algeria (36.5%) and Egypt (38.8%).

The graph below presents the distribution for preference for democracy among non-religious party supporters: 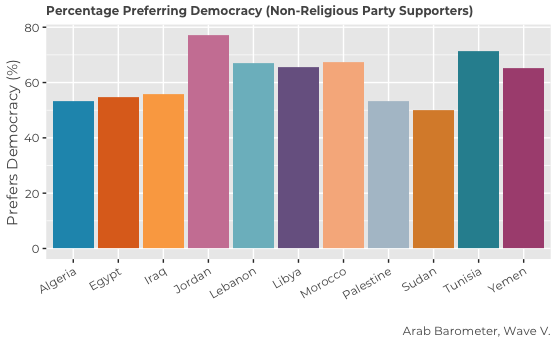 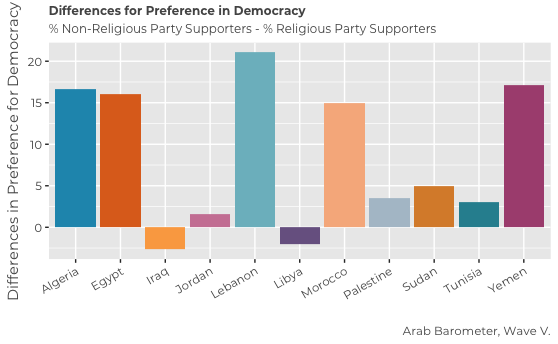 In nine of the eleven countries, supporters of non-religious parties indicate a higher preference for democracy. The highest levels of difference are in Lebanon (21.05%), Yemen (17.12%) and Algeria (16.66%). The only negative differences are in Iraq (-2.65%) and Libya (-1.58%). Interestingly, in Tunisia, the success-story of the uprisings, the difference is much lower (3.07%) compared to values in Egypt (16.08%). This could suggest a retreat among many religious-oriented Egyptians from the idea of democratic governance following the Muslim Brotherhood’s brief experience that ended with a coup.

The findings suggest that in at least nine of the eleven countries, there is no sufficient evidence to suggest that religious party supporters have higher levels of preference for democracy than non-religious party supporters. The Arab uprisings increased the interest in MENA scholarship to examine the compatibility of political Islam with democracy. However, compatibility at a theoretical level does not explain whether “Islamists” in the region are more pro-democracy than “secularists”, or citizens need Islamism for effective governance. Authoritarian governance creates challenges for individuals from different walks of life. Such chronic problems due to authoritarian governance include unemployment, corruption, wasta and censorship. Scholars should spend more effort trying to understand how these challenges impact different individuals rather than putting people into arbitrary boxes and assigning them properties that do not seem to resemble the reality.

Salih Yasun is a PhD Candidate at the Department of Political Science at the Indiana University, Bloomington (IU). He can be reached at syasun@indiana.edu.