Is this China’s Moment in MENA?

China’s influence across the Middle East and North Africa (MENA) has steadily been increasing. Seventeen countries have signed documents related to its Belt and Road Initiative (BRI). Many countries, including Lebanon, Tunisia, Egypt, and Iraq have seen dramatic increases in Chinese engagement, leading some to question if they are on the verge of becoming Chinese client states. More recently, China has dramatically and visibly increased its aid to a number of MENA countries in response to the recent COVID pandemic.

Arabs Opening Up to China

Data from Arab Barometer suggest that there is a significant opening for China, at least in the eyes of ordinary citizens across the region. In nine of 12 countries surveyed as part of the Arab Barometer’s fifth wave, roughly half or more favor stronger economic relations with China. Support is strongest in Jordan (70 percent), which is a country that has yet to join the BRI initiative. More than six-in-ten also favor stronger economic ties in Libya (63 percent), (63 percent) and Sudan (62 percent), which, like Jordan, have suffered significant economic challenges in recent years. In contrast, support for closer economic relations with China is weaker in Lebanon (42 percent) where there are strong sectarian divisions; Algeria (36 percent) where there is significant suspicion about any foreign investment, and Egypt (30 percent). 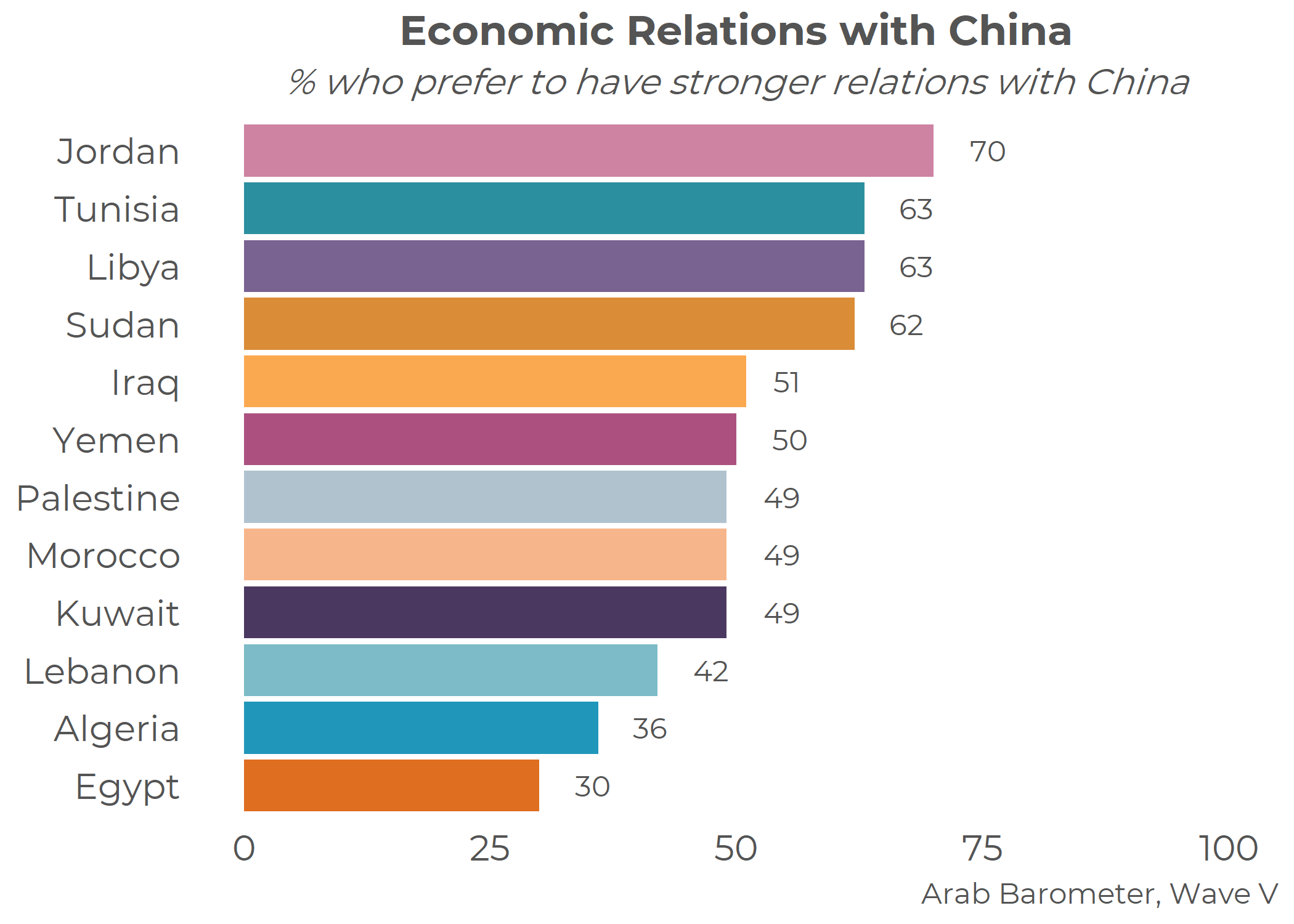 Notably, Chinese investment is especially welcomed by elites across the region. Those with a university degree are, on average, significantly more supportive of closer economic relations with China than those with a secondary degree or less. The difference is especially pronounced in Morocco (+18 points), Tunisia (+16), Algeria (+15), Iraq (+14), and Egypt (+12), while smaller gaps exist in Jordan, Lebanon, and Sudan (+6, respectively). However, views toward China do not differ widely by generation – across the region those who are younger than 35 years of age and those who are 35 or older show no consistent differences in views toward China.

Not only do citizens across MENA favor closer economic relations with China, but they also favor greater foreign assistance. In nine of 11 countries where the question was asked, half or more say that foreign aid from China should increase, including 73 percent of Jordanians, 68 percent of Sudanese, 65 percent of Yemenis, and 60 percent of Palestinians. Only in Libya (45 percent) and Algeria (38 percent) do fewer than half want more aid from China. Again, support tends to be strongest among those who have a college degree, with significant differences across roughly half of countries surveyed. 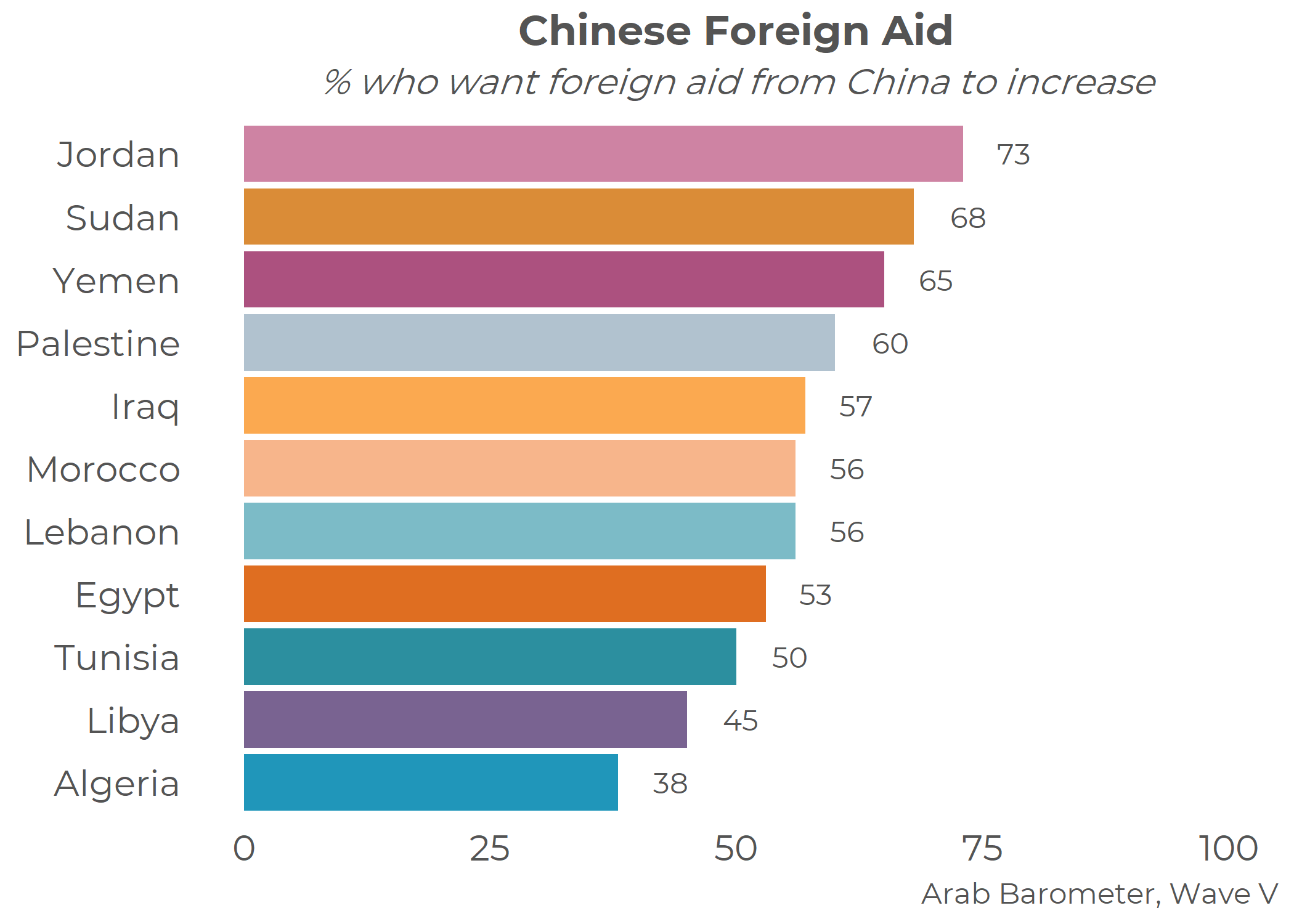 The Most Popular Global Player in MENA

Overall, the survey results find that China is the most popular global power in MENA, with citizens being more open to stronger ties than they are with the U.S. or Russia. On average, those living in MENA are 13 points more likely to favor closer economic ties with China than the U.S. China’s greater popularity extends to all but one country surveyed, including significantly higher preferences in Yemen (+30 points), Libya (+26), Kuwait (+19), Tunisia (+17), Palestine (+18), Iraq (+16), Jordan (+13), and Algeria (+12). Only in Egypt (-8 points) do citizens favor stronger economic ties with the U.S. compared with China.

Similarly, those in MENA are 9 points more likely to favor Chinese foreign aid compared with assistance from the U.S. In no country is U.S. foreign assistance more preferred than Chinese aid, although the gaps tend to be far smaller than for economic relations. Only in three out of eleven cases where this question was asked does the difference exceed 10 points: Yemen (+30), Libya (+15), and Palestine (+10). In short, although the region is widely open to foreign aid, China does not enjoy a dramatic advantage over the U.S. in most countries.

Growing Presence in the Region

Given these results, it is clear that China has a significant opportunity in the region.  Perhaps due in part to its role as a historic non-colonial power and relatively recent emergence, citizens across MENA have warmly welcomed Chinese economic engagement and are open toward its foreign assistance. Yet, at the same time, Chinese aid has largely taken the form of loans or investment projects of questionable benefit to the country.  As MENA gains more direct experience with Chinese engagement, it is possible that China’s strategy will alienate Arab publics over time as it has in other countries around the world such as Sri Lanka and Malaysia. If China continues to promote investment that benefits Beijing more than recipient countries, its high support may not last. At the same time, if China can convince ordinary citizens that its engagement is working for their good, it is possible that it will enjoy popular support for years to come.