Throughout the Middle East and North Africa (MENA), high female educational attainment is not met with commensurate participation in economic and political life, a phenomenon the World Bank dubs the “MENA paradox.” Is this paradox mirrored in gendered migration trends in the region? 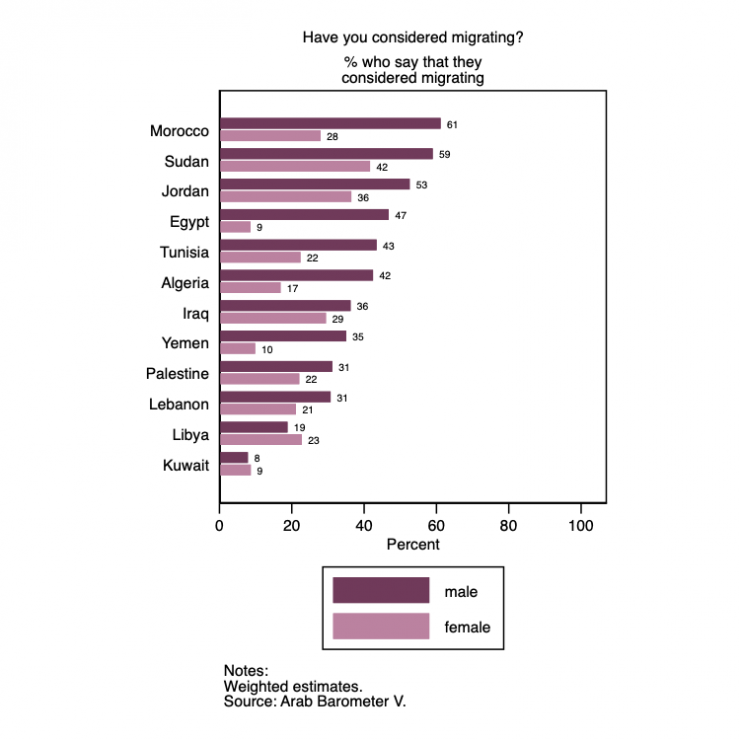 According to the fifth wave of the Arab Barometer, men are nearly twice as likely as women to consider migrating from their countries. Economic reasons are the most frequently cited motivation for migration for male respondents in every country surveyed for the fifth wave except in Kuwait (where men are more likely to leave due to corruption), and for over half of male respondents in Egypt, Jordan, Lebanon, Morocco, Palestine, Sudan, Tunisia, and Yemen. For women, however, the picture is more complex. While women also frequently list economic reasons as a primary motivation, the margin is significantly less than it is for men in many countries. In Egypt, for example, only 49 percent of women list economic reasons as opposed to 79 percent of men, and in Morocco, only 31 percent of women compared to 58 percent of men. Another factor seems to draw women in the Arab world to consider migrating: in every country surveyed by the Arab Barometer, women are more likely than men to name educational opportunities as their motivation for migration. In Algeria and Kuwait, this reason is the most frequently cited by women. 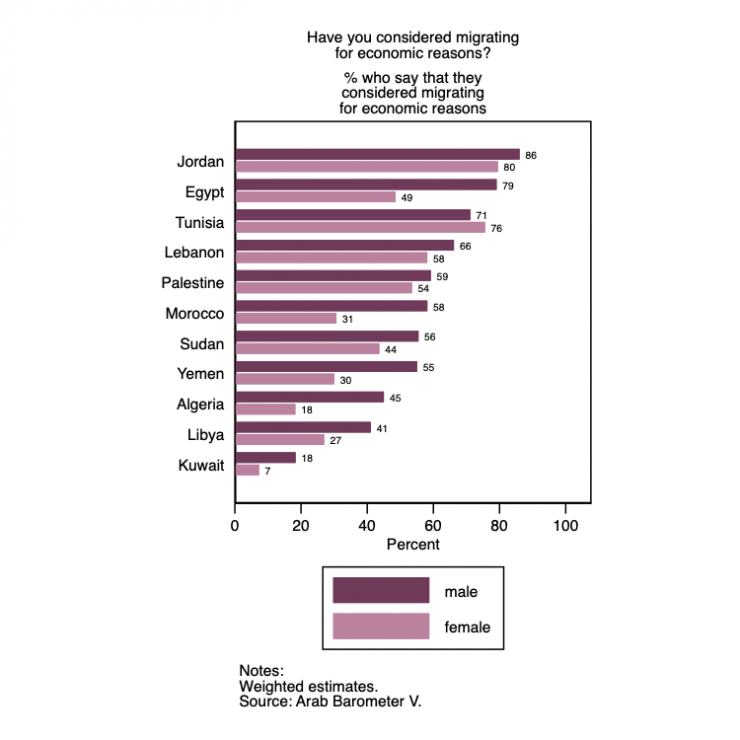 Based on these gendered differences in motivation for migration, one might be tempted to infer that women in the Arab world are not receiving the education they want. However, this conclusion is not supported by the data. Although dissatisfaction with educational systems is high across the region, the Arab Barometer finds that it is relatively equal between men and women, with men slightly more dissatisfied with their countries’ systems. Furthermore, women in the MENA region are highly educated—in some cases even more so than men. According to the World Bank, the ratio of female to male university enrollment in the Arab World was 1.11 in 2018, thus making lack of access to education an inadequate explanation.[1] 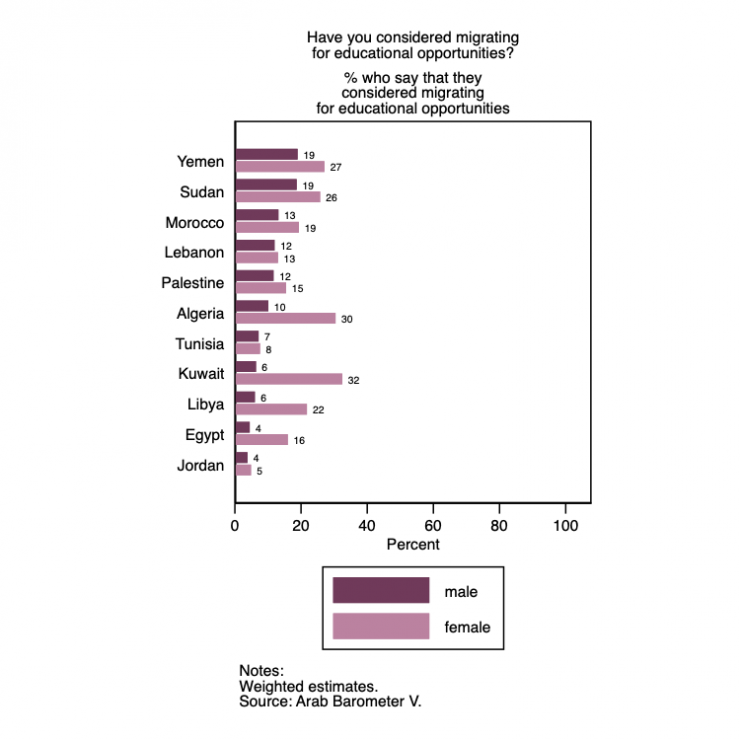 Female economic participation in the region does not mirror equality in educational attainment. According to the ILO, in 2019, only 18 percent of women in the Arab World participated in the labor force—59.6 percentage points below the male labor force participation rate.[2] These figures offer a partial explanation for Arab women’s motivations for migration – in pursuit of educational opportunities and consonant with the MENA paradox. Explanations for regional patterns in educational attainment and the gendered division of labor could also be key to understanding decisions surrounding migration.

One explanation often floated for the MENA paradox is differing societal expectations for men and women. In the fourth wave of the Arab Barometer, men were markedly more likely than women to disagree or strongly disagree with the statement that “A married woman can work outside the home if she wishes.” For example, in Algeria, where the gender difference in migration motivations is particularly notable, 43 percent of men, compared with 15 percent of women, either disagree or strongly disagree that married women can work outside of the home. Furthermore, a 2018 World Bank study in Jordan found that, although 96 percent of men and women said it was okay for women to work, when faced with practical implications related to working outside of the home, approval dissipated.[3] Only 54 percent supported women leaving children with relatives, 38 percent supported women working in mixed workplaces, and just 26 percent were okay with women returning home after 5:00 pm.[4]

Legal limitations on women’s abilities to join the workforce are another potential explanation for the MENA paradox. The World Bank’s Women, Business and the Law index ranks countries on women’s legal rights to work. Measured out of 100, it takes into account factors ranging from women’s mobility and rights to credit to a country’s sexual harassment and parental leave laws. Thus, it measures both explicit bans as well as factors that do not directly exclude women from the workplace, but make their working logistically less feasible. With a score on the index of 49.6, the MENA region has the lowest regional average, reinforcing the idea that access to the labor market in the region is gendered.

Due to these social and legal norms, it is possible that beliefs about the gendered division of labor are impacting migration trends in the region. Perhaps social norms and legal restrictions that make women less inclined or able to join the workforce in their own countries also make them less inclined to migrate for economic reasons and join a foreign workforce. Or perhaps the answer lies on the other side, and men in the region feel more pressure to earn an adequate income, even if they need to migrate to do so. For now, the differences in motivations for men and women in the Arab world to migrate remain a mystery. Just as there is no one set explanation for the MENA paradox, gendered migration motivations are most likely due to a myriad of factors.

Erin Hayes graduated from the University of Notre Dame with a degree in Political Science and Arabic and currently lives in Cairo, Egypt.