Young Arabs are Changing their Beliefs and Perceptions: New Survey

Less religious and less likely to be following religious leaders: these are the findings of a survey conducted among youth in the Middle East and North Africa (MENA) by the Arab Barometer, a pollster surveying the main social and economic trends in the region.

The main findings were published by The Economist on 5 December 2019, showing that ‘across the region the share of people expressing much trust in political parties, most of which have a religious tint, has fallen by well over a third since 2011, to 15 per cent. … The doubts extend to religious leaders. In 2013, around 51 per cent of respondents said they trusted their religious leaders to a “great” or “medium” extent. When a comparable question was asked last year, the number was down to 40 per cent. … The share of Arabs describing themselves as “not religious” is up to 13 per cent, from 8 per cent in 2013. That includes nearly half of young Tunisians, a third of young Libyans, a quarter of young Algerians and a fifth of young Egyptians.’

In an interview with Fanack, Michael Robbins, project director at the Arab Barometer, said the most surprising finding was that “Tunisian youth (46 per cent) are equally likely to say they are not religious as youth in the US who say religion has little or no importance in their lives (45 per cent in the Americas Barometer survey)”. He added, “In other countries, youth are also increasingly likely to say they are not religious (up to 18 per cent today from 11 per cent in 2013), but Tunisia stands out in this regard. Although the vast majority of youth across the region still identify as being religious, at least to some extent, if this trend continues over time, it is possible that societies in MENA will be far less religious in the decades to come.”

“These results suggest that MENA may be at the cusp of a significant change in the years ahead,” Robbins said. “For one, if religion does not play the central role it does today in the lives of citizens, it is expected that the politics of the region will change dramatically. Youth may call for governments to de-emphasize the role of religion in public life and in the state. This shift has often led to significant tensions in other regions between religious and more secular forces, and it is likely to follow a similar path in MENA.”

This scenario already seems to be happening, with nationwide protests in Iraq and Lebanon calling for less sectarianism and more care for citizens by political leaders. “Given the widespread frustrations of Arab publics, particularly the youth generation, across the region, the form of opposition to the government may be changing,” Robbins told Fanack. “In Algeria, the protests have not had a significant influence from religious actors. In Lebanon, protest leaders have de-emphasized sectarian identity throughout the protests, proclaiming that Lebanese are all one people. Although many generations are participating in these actions, youth are particularly vocal in their support of the protests. In other words, the way in which these protests are taking place suggests that the decline of religion among the youth and the loss of confidence in Islamist movements may already be shifting politics in the region.”

These changing beliefs also suggest new views of society, politics and life in general. For example, a June 2019 survey led by Arab Barometer for BBC News Arabic showed that most people in the region supported the right of a woman to become prime minister or president. According to the 2019 Arab Youth Survey, published on 25 April, two thirds of young Arabs believe that religion is too influential in the Middle East, eight in ten think religious institutions need reform and 31 per cent said they know someone with a condition such as depression or anxiety, which shows people are opening up to mental health issues. The same survey also showed that a majority of the youth thinks it is time to end all regional conflicts.

Despite this apparent appetite for change, the country’s leaders continue to fight hard to maintain their grip on power, apparently regardless of the growing anger expressed, either in the streets or on social media. Being young is also a shifting factor, as those surveyed today will grow to take their place in society as well.

“It is probably too early to say if a deeper social shift is taking place, but there is a significant possibility,” Robbins said. “It is possible that some youth will return to religion as they get older and have families, which is something that has been seen in other countries. Even if they don’t, more than four in five youth across the region remain religious, meaning that even if the trend of turning away from religion continues, it’s likely that MENA will be predominately religious for decades. It is also possible that the increase in youth saying they are not religious is temporary and will reverse itself in the years ahead. It is too soon to know, but we will continue to track this phenomenon in future surveys, which will provide a clearer picture of the degree to which a deeper social shift may be taking place.” 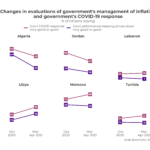 MENA citizens to their governments: “Health before wealth” 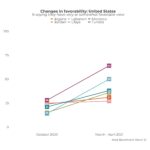 The Biden Honeymoon: Changing views of the US across Arab Barometer Wave 6 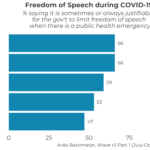 Is COVID-19 compelling Arab citizens to surrender freedoms to their governments?