While trust in government has declined significantly across the Arab region over the last decade, the COVID-19 crisis offers the possibility of a reset for governments. In the period since the Arab Barometer began conducting nationally representative public opinion surveys in the region in 2006, trust in government was at its highest during the Arab uprisings of 2011, at 53 percent. While political changes in countries like Tunisia translated into broad support for the government, trust was high even in countries like Jordan, which did not experience significant changes during the uprisings. 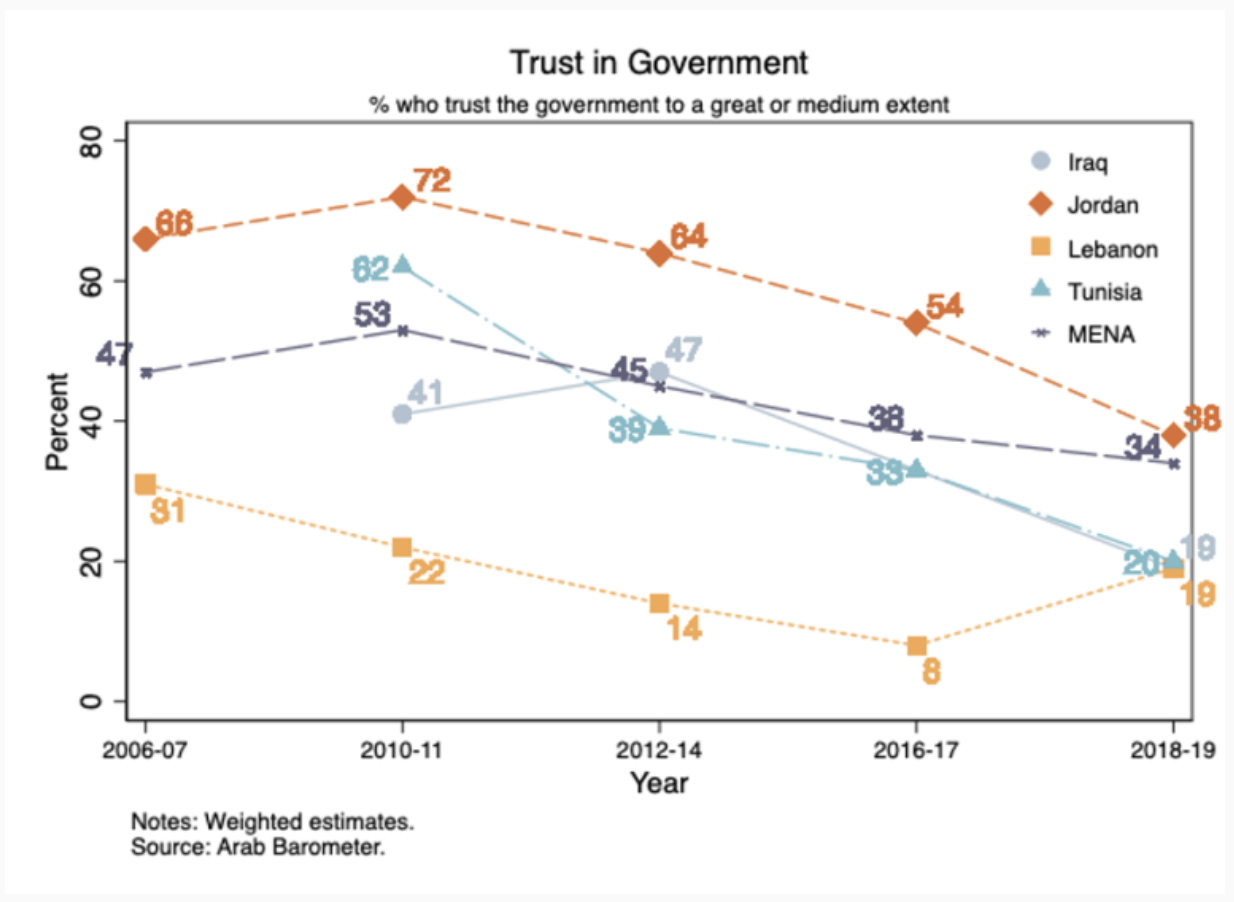 By 2018, trust had fallen across the region to just 34 percent. The decline was most dramatic in Tunisia—a drop of 42 points to just 20 percent. Tunisians appear increasingly frustrated with the ongoing failure of their government to address the economic and social conditions that led to the revolution in 2011. However, trust also fell in countries where little changed as a result of the Arab uprisings. For example, the decline in Jordan was 34 points over the same period, falling to just 38 percent. In short, the inability of governments of all stripes across the region to tackle key problems, like corruption and economic conditions, has led to a crisis of political trust.

As COVID-19 has become a dominant concern in the Arab region, governments have been forced to make difficult choices. Evidence from across the globe suggests that governments that have taken strong action to prevent the spread of the virus, even at the cost of economic health, have been viewed favorably by their citizens. Meanwhile, governments that have been unable to protect citizens by limiting the number of virus cases and deaths tend to enjoy lower confidence.

Regardless of regime type, government legitimacy depends in large part on the ability to improve conditions for ordinary citizens. COVID-19 has offered a clear opportunity for governments to prove their ability to protect the lives of their people. For instance, Jordan’s decisive measures to close its borders, lock down, and provide for the basic needs of its citizens have limited the spread of COVID-19 and demonstrated the government’s competence. This policy success is likely to result in higher levels of trust in government. Other countries, such as Morocco, Lebanon, and many GCC states, have also taken decisive action, including imposing lockdowns and closing international links. These initial efforts are likely to be viewed positively by their citizens. However, countries such as Iraq have proved far less effective in finding ways to limit the pandemic’s spread or ameliorate its effects, meaning trust in government is likely to fall.

Overall, the pandemic’s potential positive effects on trust in countries like Jordan, Morocco, and Lebanon are unlikely to last if their governments are unable to address the long-standing challenges facing their societies. In Lebanon, for example, the government’s failure to prevent the massive explosion in the port has clearly undermined any increase in trust that may have resulted from its initial better-than-expected response to COVID-19. While positive performances on COVID-19 are likely to lead to new opportunities, Arab governments will need to continue meeting citizen expectations in order to permanently reverse the decade-long decline in trust.