Could Morocco see the next uprising, after Sudan and Algeria? 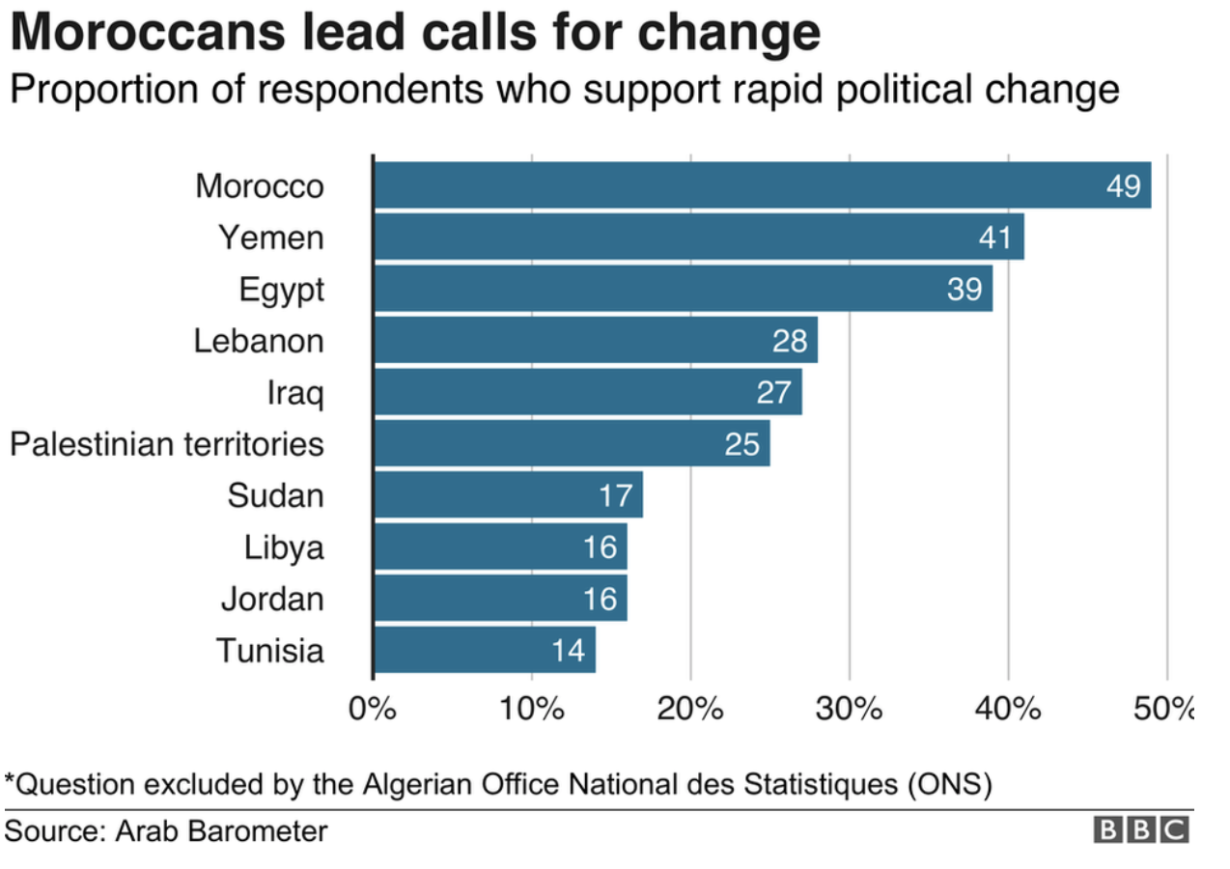 A wide-ranging BBC survey shows almost half of Moroccans are considering emigrating and want immediate political change. So could Morocco follow in Sudan and Algeria’s footsteps and topple their leader, asks Tom de Castella.

On a balcony overlooking Casablanca’s rooftops, a man draws on his cigarette and thinks about the dream that was snatched away. Saleh al-Mansouri is only in his twenties but knows what it’s like to cross the sea to Europe. He lived in Germany for several years until his bid for asylum was rejected and he was forced to go home to Morocco.

“People go there for certain things they don’t have here,” Mr Mansouri says. Some are economic – he talks about clothes you can afford, a better lifestyle – but others are less tangible. “Like freedom,” he says, before adding: “There are many things… like respect.

“There is no care here in Morocco for the population. It’s the lack of care that makes people migrate.”

Almost half of Moroccans are considering emigrating. The proportion is up sharply after a decade of decline, a survey for BBC News Arabic indicates.

Look deeper and the survey, which covers the Middle East and North Africa in 2018 and 2019 and was carried out by research network the Arab Barometer, raises an intriguing question: is Morocco in line for mass unrest?

Mass anti-government protests in Sudan and Algeria saw sudden political change in April in what has been dubbed Arab Spring 2.0. While the toppling of Omar al-Bashir in Sudan and Abdelaziz Bouteflika in Algeria shocked most people, the clues were already there to see in BBC News Arabic’s survey.

Months before mass protest decapitated their governments, the Sudanese and Algerian survey respondents were giving answers showing they were angry, fearful and desperate.

Three-quarters of Sudanese said their country was closer to dictatorship than democracy, the highest in the region. In Algeria it was 56%, third behind Libya.

Almost two-thirds of Algerians said the country’s last elections were not free or fair, more than all the other places surveyed. Only a quarter of Sudanese and a third of Algerians believed that freedom of speech existed in their country.

One other country stood out in the data – Morocco.